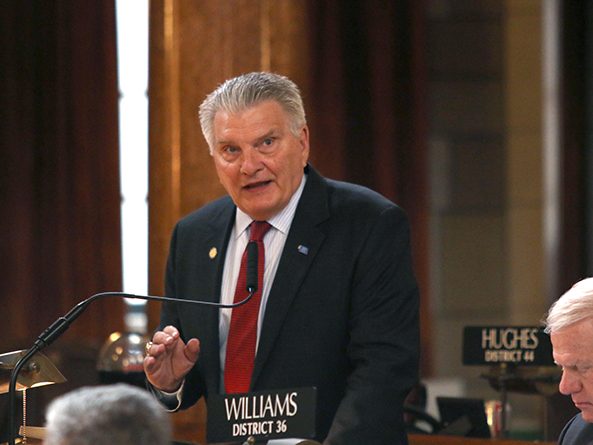 Lawmakers gave first-round approval May 8 to the state’s $9.3 billion budget package. The state budget is structured on a two-year basis, with the budget enacted during legislative sessions held in odd-numbered years.

As introduced, the Appropriations Committee budget proposal would result in an unobligated ending balance at the end of fiscal year 2020-21 that is $2 million above the 3 percent minimum reserve. The budget package reflects a two-year average spending growth rate of 3 percent.

LB298, introduced by Speaker Jim Scheer of Norfolk on behalf of Gov. Pete Ricketts, would repeal and create funds and make certain fund transfers. The governor’s proposal called for a general fund transfer of $51 million in each of the next two fiscal years to the Property Tax Credit Cash Fund, bringing the fund’s total to $272 million.

An Appropriations Committee amendment would have reduced that transfer to $25 million annually and directed the other $26 million to the state’s Cash Reserve Fund—commonly referred to as the “rainy-day fund.”

Gering Sen. John Stinner, chairperson of the committee, said a balanced approach to crafting the budget should include property tax relief, but also should focus on the long-term fiscal health of the state—which he said includes building the cash reserve back to at least 10 percent of revenue.

Elkhorn Sen. Lou Ann Linehan, chairperson of the Revenue Committee, offered an amendment to retain the original transfer. She said that while the cash reserve is important, property tax relief must be the top priority.

“This is about doing what taxpayers deserve and that’s directing these dollars to property tax relief,” he said.

Sen. Steve Lathrop of Omaha opposed the amendment. Over the last several years, he said, lawmakers have drawn down the cash reserve fund from $720 million to around $300 million. And it’s only a matter of time before the state faces another recession, he said.

Stinner also opposed the amendment, calling it “pandering” to the state’s taxpayers.

“It’s the worst kind of politics,” he said.

Senators voted 28-8 to adopt the Linehan amendment. After voting 39-0 to adopt the committee amendment, the Legislature advanced LB298 to select file 44-0.

LB294, also introduced by Scheer at the request of the governor, is the mainline budget bill. An Appropriations Committee amendment, adopted 41-1, replaced the bill and contains recommendations for state operations and state aid.

Stinner said the bill aligns substantially with the budget submitted by the governor’s office and focuses on education, essential services and safety.

“To me, this budget is all about priorities,” he said. “It’s a numerical presentation of what we think is important.”

Omaha Sen. Robert Hilkemann supported the bill and the amendment, saying lawmakers need to “think creatively and courageously” about how to grow the state. In previous years, he said, senators have had to make deep cuts to programs and services—the effects of which still are being felt.

One example, he said, were cuts to Medicaid rates to nursing facilities that have resulted in the closing of about 15 nursing homes in rural areas.

“Every cut that we [make] has permanent setbacks to many programs and agencies and we sometimes see those long-term effects,” Hilkemann said.

Sen. Steve Erdman of Bayard questioned some of the priorities reflected in LB294. For example, he suggested that the University of Nebraska should have been funded at the level proposed by the governor, rather than having its funding increased by the committee.

“We have four campuses and we have four administrations,” Erdman said. “We need to do some consolidation.”

The package also includes LB293, which would adjust appropriations for the current fiscal year. The committee amendment, adopted 42-0, replaced the bill.

The amendment includes provisions of LB202, introduced by Lincoln Sen. Anna Wishart, which would appropriate $2.7 million in the current fiscal year to the state Department of Health and Human Services.

The provision is to provide for the last of three payments to developmental disability providers who did not receive full compensation for services rendered due to a DHHS error.

Following adoption of the committee amendment, LB293 advanced on a vote of 42-0.

The Appropriations Committee budget proposal includes four additional bills:
LB295, advanced 35-2, which would provide for the $12,000 annual salaries of Nebraska’s 49 state senators;
LB296, advanced 40-0, which would fund salaries and benefits for judges and constitutional officers;
LB297, advanced 41-0, which would appropriate funds for reaffirmed and new capital construction projects; and
LB299, advanced 47-0, which would make a $54.7 million transfer from the state’s Cash Reserve Fund to the Nebraska Capital Construction Fund to cover costs for two additional high security housing units—384 beds—for the Department of Correctional Services.

Finally, lawmakers advanced LB464, introduced by Business and Labor Committee chairperson Sen. Matt Hansen of Lincoln, which would provide for payment of claims against the state. If a person sues the state, he or she files with the state claims board. Approved claims exceeding $50,000 must be reviewed by the Legislature.