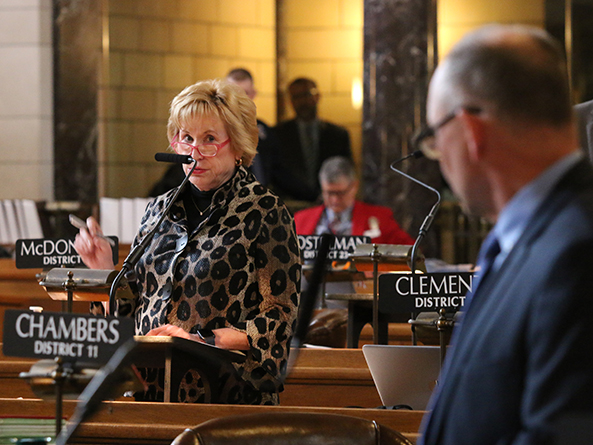 Lawmakers debated a bill Feb. 19 and 20 that is intended to reduce the state’s reliance on property taxes to fund education by increasing state aid to public schools.

Introduced by the Revenue Committee, LB974 would, over three years, reduce the percentage at which property is valued for school tax purposes while using up to 15 percent of state tax revenue to provide foundation aid per student to each school district.

Sen. Lou Ann Linehan, the committee’s chairperson, said Nebraska ranks among the lowest in terms of state funding for public K-12 education, which has resulted in high property taxes for all Nebraskans. Linehan said LB974 would reduce that overreliance on property taxes to fund public schools without cutting school funding.

A pending Revenue Committee amendment would replace the bill. Linehan said it would adjust the original proposal’s cost and provide an estimated $520 million in property tax relief over the next three years.

Like the original bill, the amendment would reduce valuations of agricultural and horticultural land and real property for purposes of taxes levied by school districts.

Real property would be valued at 95 percent of its actual value for school tax purposes for tax year 2020, 91 percent for 2021 and 87 percent for 2022 and after. The original bill would have set the final value at 85 percent.
At the same time, the amendment would use an increasing percentage of net state tax collections to provide schools with foundation aid. For school fiscal year 2022-23, Linehan said, foundation aid would amount to approximately $2,341 per student.

In addition to other proposed changes to the state’s school funding formula, the proposal would limit school budget growth by tying it to the Consumer Price Index.

Linehan said the change would better reflect what taxpayers can afford to pay for government services. The amount of property taxes levied by local governments over the past decade has increased at a higher rate than the Nebraska median household income, she said.

“It’s not that people don’t want to fund their schools or their counties or their cities,” Linehan said. “They cannot afford it.”

The proposal contains several provisions Linehan said are intended to ensure that schools do not lose funding. The amendment would allow school districts that meet certain criteria to receive transition aid, over a period of three years, if they have a budget shortfall.

Linehan said the amendment also would allow certain districts, by a two-thirds majority vote of their boards, to raise their levies to make up for lost revenue caused by any short-term adjustment the Legislature may make to the school funding formula.

The proposal also would allow districts that have commenced projects using their special building fund to continue to levy enough to pay for those projects, she said.

“I believe it would be irresponsible of us to inject hundreds of millions of additional state dollars into K-12 education and not try to ensure that those dollars yield property tax relief for hardworking Nebraskans,” Briese said.

By directing additional state aid to rural school districts that now rely mostly on property taxes, she said, the proposal would decrease property taxes for farmers and ranchers.

“We’re taxing the core of our economy—and rural Nebraska as a whole—out of business,” Slama said.

Also in support was Sen. Mike Groene of North Platte, who said the proposal would “reset” the state’s school finance system. He said LB974 would address current funding inequities by providing state aid for each student and by guaranteeing at least 15 percent of each school district’s basic funding.

Groene said concerns he has heard from school administrators that the proposal would reduce school funding are unfounded.

“Don’t fear that our public schools will be harmed,” he said.

Sen. Sue Crawford of Bellevue said she opposed the bill in committee because it would not protect public school funding. She said groups representing public schools of all sizes oppose LB974 because, although it would increase state aid, it also would reduce school districts’ property tax asking authority.

“If we’re coming together to provide meaningful property tax relief while protecting our public schools,” she said, “it’s important that we have a solution that we can get our schools behind.”

Additionally, Crawford said, the proposed transition aid would not be enough to keep growing schools whole.

Sen. Wendy DeBoer of Bennington filed a motion to bracket the bill, which effectively would end debate on it for the session. She said the proposal would repeal an averaging adjustment in the school funding formula that provides a significant amount of aid to large schools that educate most Nebraska students.

DeBoer said school groups and school finance experts oppose LB974 because it would not provide adequate school funding over the long term.

“When they are universally against it,” she said, “I feel like they probably are onto something and we ought to listen to them.”

After three hours of general file debate, the Legislature moved to the next item on its agenda without voting on the bracket motion, the committee amendment or the bill. Per a practice implemented by Speaker Jim Scheer, the sponsor of a bill that is facing a potential filibuster must demonstrate sufficient support for a cloture motion before the measure will be scheduled for additional debate.