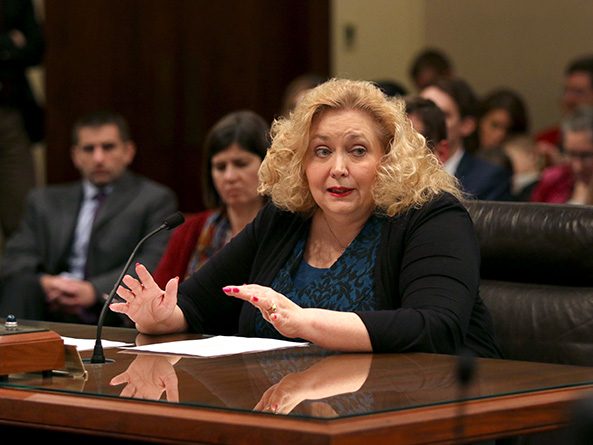 The Banking, Commerce and Insurance Committee heard testimony March 4 on a bill that would require most health insurance plans to pay for hearing aids for young Nebraskans.

LB15, introduced by Bellevue Sen. Carol Blood, would adopt the Children of Nebraska Hearing Aid Act. It would require most health plans to cover expenses associated with hearing aids for Nebraskans younger than 19, including evaluation, fitting, programming, repairs and auditory rehabilitation and training.

Small-business group health plans would be exempt, and insurance companies that could show that expenses associated with hearing aids would exceed one percent of premium dollars collected per year would be exempt for a plan year. LB15 also would cap covered expenses at $3,000 over four years.

Many insurance companies view insertion of hearing aids as an elective procedure, Blood said, but for the on average 69 kids born each year in Nebraska with a hearing impairment, a hearing aid is a lifeline.

“Can you name a medical device that changes the lives of millions for the better, yet generally is not covered by insurance?” Blood said.

Cindy Johnson, a pediatric audiologist, testified in support of LB15. Medicaid currently will pay for children’s hearing aids, Johnson said, but no Nebraska-based insurance company covers the $1,500 to $3,000 expense.

Peter Seiler, executive director of the Nebraska Association of the Deaf, also spoke in favor of the bill through an American Sign Language interpreter. Seiler said he was born deaf and his parents were able to buy him a hearing aid. He said he may not have been able to earn a Ph.D. without his family making that investment.

“Parents have to give up other things if they choose to provide hearing aids for their children,” Seiler said.

Also testifying in support was Josh Sevier of the Nebraska Speech-Language-Hearing Association. Sevier, an audiologist, said hearing impairment has a detrimental effect on children’s speech development and can limit their employment opportunities as adults.

“The first few years are especially crucial,” Sevier said. “If they are unable to hear the production of sound from friends and family, they will develop a pattern of speech filled with speech errors. These errors, if left untreated, will lead to detriments in education.”

Robert Bell, executive director of the Nebraska Insurance Federation, testified against LB15. Bell said hearing aids are beneficial, but the costs of coverage must be passed on to others.

“We’re opposed to all health insurance mandates no matter how noble,” Bell said.