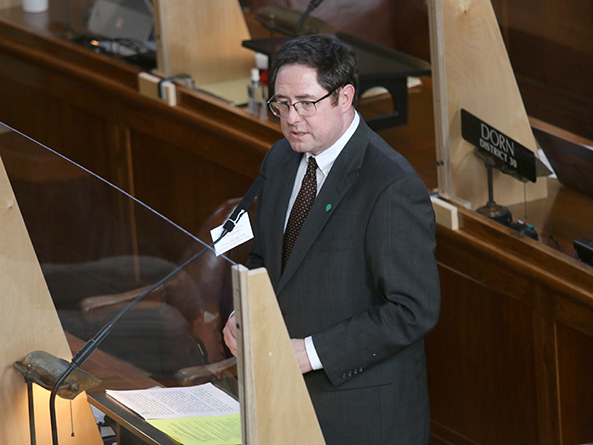 Lawmakers gave first-round approval March 30 to a bill that would create a legal and regulatory framework for the geologic storage of carbon dioxide in Nebraska.

Under LB650, sponsored by Norfolk Sen. Michael Flood, the Nebraska Oil and Gas Conservation Commission would regulate facilities that inject carbon dioxide through wells into underground geologic formations for permanent or short-term storage.

Nebraska ethanol plants in particular could use the technology to reduce their carbon scores, he said, making their ethanol more competitive in states like California that have adopted low-carbon fuel standards.

“This bill is the unique intersection of addressing climate change and an opportunity for Nebraska agriculture and Nebraska industries to profit from the same,” Flood said.

LB650 would allow geologic storage only if a storage operator obtains a permit from both the commission and the Environmental Protection Agency’s Underground Injection Control program. Before the commission issues a permit, it would hold a public hearing and consult with the state Department of Environment and Energy and the federal permitting authority.

The commission must find that the proposed storage facility would not endanger surface waters or underground drinking water sources and that the storage operator would establish a testing and monitoring plan to assess the location and migration of injected carbon dioxide.

Before issuing a permit, the commission also must find that the storage operator obtained the consent of those who own portions of the storage reservoir comprising at least 60 percent of the reservoir’s physical volume.

The bill would authorize the commission to require that any portions of the reservoir owned by nonconsenting owners be included in a storage facility. Those owners would be “equitably compensated.”

LB650 would require storage operators to pay the commission two fees on each ton of carbon dioxide injected for storage, one to defray administrative expenses and another to defray expenses incurred in the long-term monitoring and management of a closed storage facility.

Senators voted 40-0 to adopt a Natural Resources Committee amendment. Brainard Sen. Bruce Bostelman, the committee’s chairperson, said it makes technical clarifications, adds a severance clause and ensures that LB650 would not interfere with the commission’s regulation of oil and gas operations.

Sen. Dan Hughes of Venango supported the bill. After consulting with State Geologist Matt Joeckel, Hughes said, he is confident that carbon dioxide can be stored safely at certain sites in Nebraska for the long term.

Hughes said industries that emit carbon dioxide could invest more than $1 billion in carbon capture and storage projects in the state.

“It’s an opportunity that Nebraska should grab hold of because I think it could be a very large investment for our state and a huge boost to our economy,” he said.

North Platte Sen. Mike Groene also supported LB650. Although the proposal sounded “a little science fiction” at first, he said, it is a proactive measure that would give Nebraska ethanol plants an economic advantage.

Omaha Sen. John Cavanaugh supported the bill, although he did not vote to advance it from committee. Public testimony on LB650 allayed many of his initial concerns, he said, but the Legislature should consider limiting the size of storage reservoirs to avoid infringing on the property rights of nearby landowners.

Cavanaugh said the bill is a step toward factoring the external cost of a product’s carbon dioxide emissions into its price, with the goal of mitigating climate change. He said Flood’s proposal shows that addressing climate change can present economic opportunities for Nebraska industries and products.

“There is an opportunity to improve our state by taking actions on climate change,” Cavanaugh said, “and this is one of them.”

Sen. Justin Wayne of Omaha, who also did not vote to advance the bill from committee, said his primary concern is that LB650 would create a process by which the state would assume liability for a carbon dioxide storage facility.

“I just have a problem when a company may be able to profit and then close its door and the state assumes the liability for anything that goes wrong,” Wayne said.