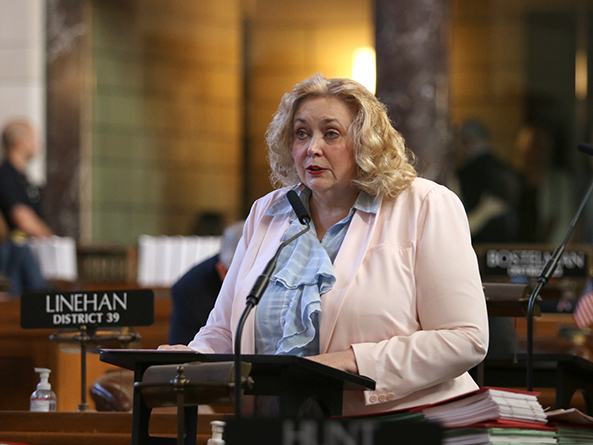 A bill that would allow licensed barbers to offer in-home services was amended to become an omnibus health bill and advanced from general file March 3.

LB755, introduced by Sen. Carol Blood of Bellevue, would require barbers who work at a client’s home to obtain a permit from the state Board of Barber Examiners. The bill also would allow nail technicians to offer in-home services.

The bill would expand the definition of who qualifies for home services to include people with persistent physical and mental disabilities.

Blood said 22 percent of Nebraskans have a physical or mental disability that may make it difficult or impossible to leave their home for personal care services. The bill also would help caretakers who are unable to leave the person they are caring for, she said.

A Health and Human Services Committee amendment, adopted 39-0, added the provisions of five bills to the measure:
• LB37, introduced by Sen. Robert Hilkemann of Omaha, which would amend the Podiatry Practice Act to allow a physician’s assistant to perform services that are delegated by and provided under the supervision of a podiatrist and are within the podiatrist’s scope of practice;
• LB772, introduced by Sen. Matt Williams of Gothenburg, which would remove restrictions on physician assistants regarding the details of their collaborative agreement and their ability to work in a hospital and prescribe medication, including allowing a physician assistant to serve under several specialists who may work at the same practice rather than solely under a single physician;
• LB811, introduced by Sen. John McCollister of Omaha, which would amend the Parkinson’s Disease Registry Act and require that a patient’s date of birth rather than Social Security number be included in a pharmacist’s semi-annual report to the state Department of Health and Human Services;
• LB825, also introduced by Hilkemann, which would add Spinal Muscular Atrophy to the list of 32 required screenings for all infants born in Nebraska; and
• LB834, introduced by La Vista Sen. John Arch, which would allow architecture candidates to begin taking their professional licensure exam as they are completing their education and experience requirements, and allow engineers to take one of their two exams prior to completing four years of post-accredited degree experience.