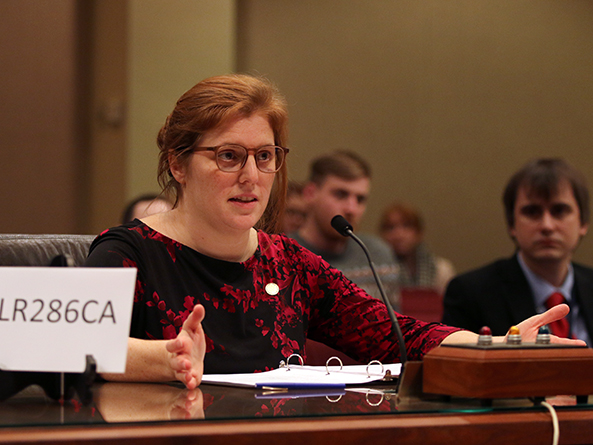 Individuals convicted of most felonies in Nebraska would no longer lose their right to vote under a constitutional amendment considered Feb. 26 by the Government, Military and Veterans Affairs Committee.

The amendment, if approved by the Legislature, would appear on the general election ballot in November.

Cavanaugh said disenfranchisement of felons can be traced back to post-Civil War efforts to prevent blacks from voting.

“The result was the mass incarceration of African Americans who, having recently been granted a voice in their own government, had it taken away from them,” Cavanaugh said.

Jasmine Harris, of RISE—a nonprofit that helps those released from prison transition back into society—testified in support of the bill. Restoring voting rights helps former prisoners feel more a part of their community and reduces recidivism, she said.

“Working with people who are incarcerated has shown me that they are more engaged with what’s going on in their government than many who have never been incarcerated,” Harris said. “Being allowed to exercise a right, like voting, is not only the right thing to do, it is humane.”

Gavin Geis, executive director of Common Cause Nebraska, also testified in support. He said disenfranchising those who have committed a felony does not serve as a deterrent to criminal behavior nor does it “even the score” on behalf of crime victims.

“Are we rehabilitating … these people by not allowing them to participate?” Geis said. “By rejoining individuals to our communities, that’s rehabilitation.”

No one testified against the proposal and the committee took no immediate action on it.