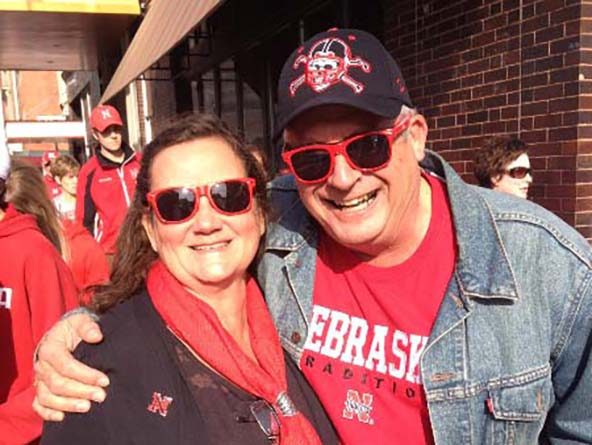 Above: Sen. Friesen and his wife, Nancy, show their spirit in Husker red at the Big 10 championship game in Indianapolis.

An encounter with a Nebraska congresswoman more than 35 years ago set Sen. Curt Friesen on a path that eventually led to the State Capitol.

As a new farmer, Friesen found himself at odds with a U.S. Department of Agriculture rule and contacted Congresswoman Virginia Smith seeking relief. The meeting went well—so well, in fact, that officials told him they had heard from her office within a week.

The disputed rule eventually was changed and Friesen learned a valuable lesson.

“I realized from that experience that you can complain in the coffee shop all you want,” he said, “but if you actually want to be part of the solution to a problem, you have to get involved in the process.”

So, the new senator started on a path of public service that included serving as Henderson’s mayor and on the Henderson Chamber of Commerce, Upper Big Blue Natural Resources District and the Nebraska Corn Board, among others.

Friesen said he didn’t realize that the road would bring him to the Legislature, but he’s happy for the opportunity to focus on a wide range of issues. In order to have more time to do so, Friesen said he’ll be staying in Lincoln during the week.

“Henderson isn’t too far away,” he said, “but that commute would be two hours out of the day that I could spend developing relationships and studying bills and policy.”

A fifth generation farmer, Friesen and his wife Nancy moved back to the family farm near Henderson five years ago. He said daughter Kori and her family recently moved back to the area from California and will help the couple with the farm operation while he serves in Lincoln.

Friesen said Nancy is a huge help on the farm, but he values their quiet times more.

“She’s an excellent combine driver, but she’s also my sounding board,” Friesen said of his wife of 40 years. The couple’s three other children—Shannon, Tiffany and Neal—have made homes in Omaha, Washington, D.C. and Indiana.

Friesen said he has stayed in Nebraska in part because of the allure of agriculture, which for him is the simple act of growing.

“When you’re farming, you actually create something,” he said. “You place a seed in the ground and produce something tangible. There is great satisfaction in that for me.”

Friesen said he considers himself capable of disagreeing without being disagreeable—something that will serve him well in the Legislature.

“The highest compliment I can think of is being able to retain someone’s respect for you, even when you disagree,” he said. “There is diversity in opinions and priorities in Nebraska and we have to acknowledge that. We need to be careful about becoming entrenched in our positions and becoming unable to see the greater good.”