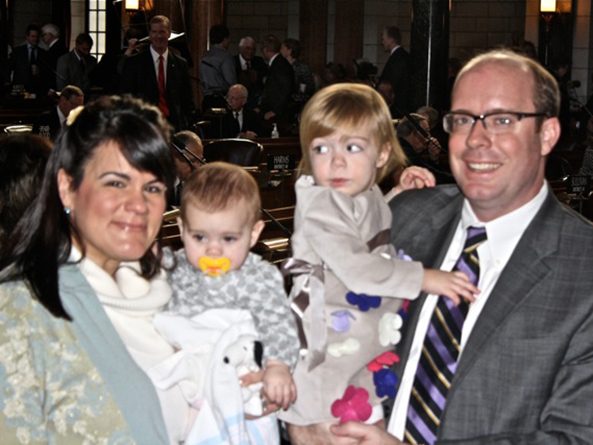 Above: Sen. Burke Harr with his wife, Jennifer, and daughters, Augusta and Rita.

After receiving his undergraduate degree from the University of St. Thomas in Minnesota, Sen. Burke Harr had a decision to make: he could enter law school directly or take a year off to obtain some real world experience before beginning his legal studies. Harr chose the latter.

The Omaha native set course for California’s Silicon Valley to participate in a program sponsored by Jesuit Volunteer Corps. Harr worked at the Peninsula Family Resource Center, which mostly served single mothers receiving assistance from the Aid to Families with Dependent Children program.

“It gave me a chance to get out and do something of substance,” Harr said. “I had been pretty lucky in my life up to then and I wanted to have a chance to give back a little.”

The center provided clients with rent assistance, a full food pantry and clothes for job interviews, Harr said, with the goal of helping them become self-sufficient.

“We had to teach how to budget, the importance of delayed gratification, how to open a checking account and how to use mass transit to get to work,” Harr said.

Harr said the program demonstrated to him poverty’s prevalence in even the richest parts of the world.

Harr enrolled in the Notre Dame Law School the following year. He moved back after graduating to take a clerkship with the Nebraska Court of Appeals.

“That’s when I first got the bug of the Legislature,” he said, adding that working in the same building as legislative employees showed him their love for the institution.

His subsequent jobs included prosecuting for the Douglas County Attorney’s Office, practicing real estate law and starting his own business consulting firm with a friend.

The senator also is an avid outdoorsman, although his hunting activities have been curbed by the birth of his two young daughters, Rita and Augusta.

“Right now, my hobby is my family,” Harr said.