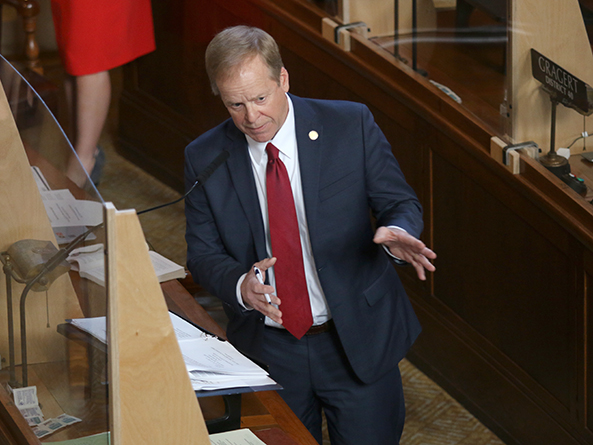 Under the Advantage Microenterprise Tax Credit Act, a business with five or fewer full-time employees can apply to receive a refundable tax credit designed to help decrease the cost of startup and expansion.

The program, which offers a tax credit to approved microbusiness taxpayers for new investment or employment equal to 20 percent of the investment amount — up to a maximum of $10,000 — is set to expire in 2022. Total credits approved under the program are limited to $2 million annually.

As introduced by Albion Sen. Tom Briese, LB366 would extend the program expiration date through 2024 and decrease the credit from 20 to 10 percent of the new investment amount for eligible depreciable tangible personal property.

Briese said the program has had a “tremendous impact” on his legislative district, with more than 340 total credit users since 2007.

“Knowing how important small businesses are in my own district, and the impact that this program has made toward their success, I believe this credit could be used by many others across the state,” he said.

A Revenue Committee amendment, adopted 39-1, would extend the program through 2032 and retain the credit at 20 percent of the taxpayer’s new investments in property or employment.

The bill also would raise the maximum lifetime tax credits claimed by any individual from $10,000 to $20,000. Briese said the adjustment reflects changes in the cost of doing business that have taken place since the credit was first implemented in 2005.

Finally, LB366 would strengthen reporting requirements and allow certain family members of a person who has received the maximum credit to participate in the program also — as long as ownership is not shared and the businesses are completely separate.

The tax commissioner’s report would provide information on project-specific total credits for each approved application that includes the:
• taxpayer’s identity;
• location or locations where credits are being earned;
• new investment or new employment that was produced by the taxpayer; and
• total credits used in the previous two years.

The changes made by LB366 would apply only to applications made after the bill’s operative date.

Plymouth Sen. Tom Brandt supported the bill and the amendment, calling the changes “welcome improvements” to an important economic development program that has proven to be a successful strategy for growing small businesses.

He said approximately 70 percent of the businesses in his district have 20 or fewer employees and most have fewer than five.

“These businesses are the heart of our communities,” Brandt said. “They not only provide valuable services, which boost local economies and ensure everyone has access to necessities, they also make up a substantial portion of the jobs and income.”

Sen. Jen Day of Omaha also supported the proposal. Programs like the microenterprise tax credit are a “crucial lifeline” to small businesses, she said.

“We have really large, robust corporate tax incentive programs in Nebraska … and those are great and wonderful, but I think we could do a better job of supporting local, small businesses,” Day said.

North Platte Sen. Mike Groene expressed concern about extending the credit for 10 years. Because senators are allowed to serve a maximum of only eight years at a time in the Legislature due to term limits, he said, programs should not be extended for a period longer than that.