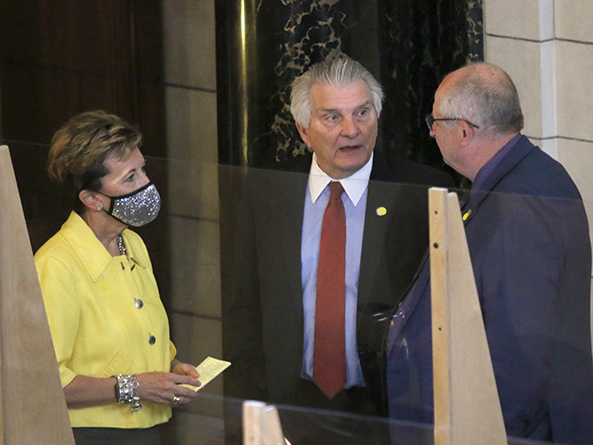 After two full days of debate, lawmakers gave first-round approval April 9 to the state’s $9.7 billion budget package. The state budget is structured on a two-year basis, with the budget enacted during legislative sessions held in odd-numbered years.

As introduced, the Appropriations Committee budget proposal would result in a projected ending balance that is $211 million above the 3 percent minimum reserve. This amount would be available to fund proposals pending before the Legislature this session. The Cash Reserve Fund would increase to $763 million.

The budget package reflects a two-year average spending growth rate of 1.7 percent. It includes a 2 percent per year increase in rates for providers of various social service and juvenile programs, amounting to $83.5 million over two years.

Gering Sen. John Stinner, chairperson of the Appropriations Committee, said the overall budget package would result in $1.45 billion in property tax relief for Nebraskans over the next two years.

Much of the debate focused on a proposal to fund a study of the design and siting of a potential new state prison.

Included in the Appropriations Committee’s proposal is LB383, which would appropriate funds for reaffirmed and new construction projects recommended by the governor for the next biennium. Reaffirmed projects include those currently underway that already have received approval but were funded over several years.

Stinner said the governor’s proposal included funding for a new multi-custody level correctional facility with capacity to house approximately 1,512 inmates. The $230 million project would have been financed mostly by transfers from the Cash Reserve Fund to the Nebraska Capital Construction Fund over the next five years, he said.

A committee amendment, adopted 37-3, instead would transfer $115 million from the General Fund to the NCCF, but would not appropriate those funds until the need for a specific project or facility was determined by the Legislature.

Stinner said the committee had additional time to consider funding a new prison after voting on the committee amendment, however, and decided to take a broader approach.

He offered an amendment that would transfer $350,000 in FY2021-22 from the NCCF to the state Department of Correctional Services to update their master plan and examine demand for behavioral health, mental health and substance abuse services at current correctional facilities compared to actual treatment capacity, taking into consideration the physical condition of the facilities.

The amendment also would appropriate $500,000 in FY2021-22 to the department to prepare a program statement and site selection for a new halfway-back community corrections center in Omaha.

An additional $18 million would fund the design, planning and construction of three specialty units — to be used for additional mental health and geriatric patients or other individuals with special needs — which would add at least an additional 96-bed capacity at the state’s reception and treatment center.

Finally, the amendment would appropriate $14.9 million to fund the preparation of designs for a possible new facility, including site selection and an option to purchase, as well as completion of an independent engineering study regarding the useful life of the current Nebraska State Penitentiary.

Lincoln Sen. Anna Wishart supported the amendment, which she said would allow the state to work with experts from the Criminal Justice Institute — and in collaboration with Nebraska stakeholders — to address broader issues of criminal justice reform. She said CJI are federal experts who “coach” states on how better to manage their criminal justice systems.

Nebraska has an opportunity with the Stinner amendment to address the “historic wrong” of mass incarceration that is “steeped in systemic racism,” she said.

“Our country imprisons more people than any other country in the world, and a disproportionate number of those prisoners are Black,” Wishart said. “We cannot build our way to criminal justice reform — not possible — nor should we have the goal of doing that.”

Sen. Terrell McKinney of Omaha opposed the amendment, saying it wouldn’t address the core reasons that individuals end up in the state’s correctional system.

McKinney said he has witnessed firsthand the state’s lack of investment in low-income communities and communities of color and that Nebraskans shouldn’t be surprised that people who lack options make bad choices as a result.

“Public safety is taking care of people,” he said. “We don’t invest in the communities that these people come from. Why do we refuse to address the root issues?”

Omaha Sen. Justin Wayne offered an amendment that would appropriate $3.2 million each year of the biennium for programs and grants for individuals residing in community work release and treatment centers.

Nebraska releases almost half of its prison population annually, he said, and 30 percent of those individuals reoffend within the first three years of being released.

“This [committee proposal] is an approach that is limited to building something new,” Wayne said. “We aren’t talking about the other aspect of reentry.”

The amendment lost on a vote of 13-8. Following the 7-27 failure of a second Wayne amendment to strike funding to study a new state correctional facility, senators voted 37-3 to advance LB383 to select file.

Included in the amendment were provisions of Stinner’s LB264, which would appropriate $100,000 for each fiscal year of the biennium for creative districts authorized by the Nebraska Arts Council.

Norfolk Sen. Mike Flood brought an amendment, adopted 28-12, to increase that funding to $1 million per year. He said that 10 competitive grants of $10,000 each would be insufficient to revitalize smaller communities and change the trajectory of economic development in rural areas.

Rural parts of the state struggle to attract and retain people with an entrepreneurial spirit, Flood said, in part because those individuals desire to live in areas that value the arts and innovation.

“We can grow our rural communities using arts and culture,” Flood said. “I’ve seen it work in my community.”

Sen. Megan Hunt of Omaha supported the amendment, calling it a “conservative and smart” amount of money. Vibrant arts communities draw in people to support local restaurants and other small businesses, she said, and are an economic development tool.

Omaha Sen. Machaela Cavanaugh offered and later withdrew an amendment that she called an “amped up” version of her LB493. The amendment would have fully funded the state’s developmental disability wait list, which she said has grown to more than 2,900 people in recent years.

The amendment would have provided $54 million in general funds in each fiscal year of the biennium to provide services to all individuals currently on the list.

Wishart opposed the amendment. She said the committee’s proposal includes increased funding for the wait list and that a sustainable, targeted approach that also addresses provider rates is necessary.

The committee’s budget package also includes LB384, which would transfer funds and change the permitted use of a fund. A committee amendment, adopted 44-0, added provisions of Stinner’s LB588.

Those provisions would extend existing appropriations for deferred maintenance under the University of Nebraska Facilities Program until 2062 and the State College Facilities Program until 2040. The amendment also would require that the university establish a revolving facility maintenance fund with a 2 percent allocation of all construction funds expended to mitigate further backlog.

Following adoption of the amendment, senators voted 44-0 to advance LB384 to select file.

LB379 would make adjustments to funding for state operations, aid and construction programs in the current fiscal year ending June 30, 2021.

An Appropriations Committee amendment, adopted 38-0, would appropriate $475,000 in general funds to the State Racing Commission for startup costs related to the Nebraska Racetrack Gaming Act. The commission is charged with implementing provisions of a successful initiative petition drive in 2020 that authorized gaming at licensed enclosed racetracks in Nebraska.

Following adoption of the committee amendment, senators advanced the bill to select file 38-0.

LB385, as introduced, would make a number of fund transfers to and from the state’s Cash Reserve Fund. A committee amendment, adopted 41-0, instead would authorize a $50 million transfer to the newly created United States Space Command Headquarters Assistance Fund. The transfer would occur only if Nebraska is selected as the site of the U. S. Space Command Headquarters.