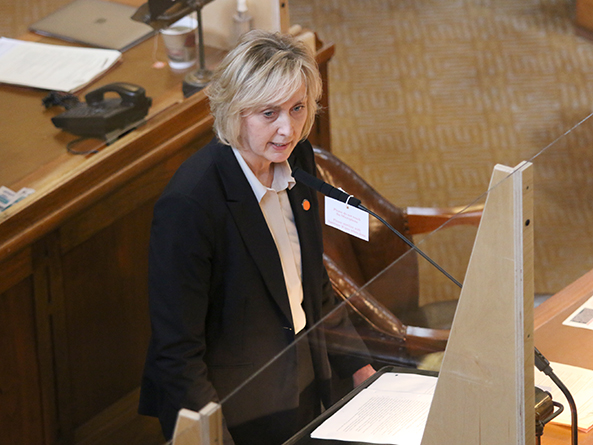 Lawmakers gave first-round approval March 24 to a bill that would allocate approximately $100 million in lottery funds to education-related programs over the next five years.

Current law directs 44.5 percent of state lottery funds to various education programs each year. LB529, introduced by Fremont Sen. Lynne Walz, would allocate those funds to more than a dozen programs for fiscal years 2021-22 through 2025-26.

Beginning with the 2023-24 school year, school districts would ensure that teachers, administrators, paraprofessionals, school nurses and counselors receive the training.

LB529 also would direct funds to a new mental health training grant program administered by the state Department of Education.

The Nebraska Opportunity Grant Fund, which provides financial aid to low-income Nebraska residents enrolled at postsecondary educational institutions, would receive the largest allocation at 58 percent, down from the 62 percent allocation it received for fiscal years 2016-17 through 2020-21.

An Education Committee amendment, adopted 29-6, would add an element to the proposed behavioral awareness and intervention training. It would require at least 30 minutes of training dedicated to understanding the duties, rights and responsibilities outlined in the Student Discipline Act and case law addressing student behavior.

The amendment also would create a grant program for students who graduate from an accredited education program at a state youth rehabilitation and treatment center or from a public or private high school within one year of being discharged from a YRTC.

Those students could receive up to $5,000 per year to attend a Nebraska postsecondary educational institution if they meet certain requirements.

“This is a great opportunity to help these kids turn their life around, go to college at least part time and enter the workforce,” Walz said.

Sen. Patty Pansing Brooks of Lincoln supported the committee amendment and the bill. If LB529 does not pass, she said, the Nebraska Opportunity Grant program will end in June, leaving Nebraska without a need-based financial aid program for students who attend state postsecondary institutions.

Sen. Dave Murman of Glenvil introduced an amendment containing many provisions of his LB673. The amendment would authorize teachers and other school personnel to use reasonable physical intervention to manage student behavior to protect themselves, the student or another person from physical injury.

Under Murman’s proposal, teachers or other school personnel would not be subject to professional or administrative discipline for physical intervention or removal of a student from a class if they acted in a reasonable manner and in accordance with school policy.

It also would direct each school district to provide behavioral awareness and intervention training to administrators, teachers, paraprofessionals, school nurses and counselors beginning in school year 2021-22.

Murman said the amendment would provide funding to each school district and allow them to choose their own training program rather than rely on ESUs.

North Platte Sen. Mike Groene supported the amendment, saying it would protect teachers from being fired or suspended for defending themselves or others from a student who becomes violent.

Murman later withdrew the amendment but said he would introduce a similar one during the second round of debate.

After adopting a technical amendment, senators voted 28-6 to advance LB529 to select file.