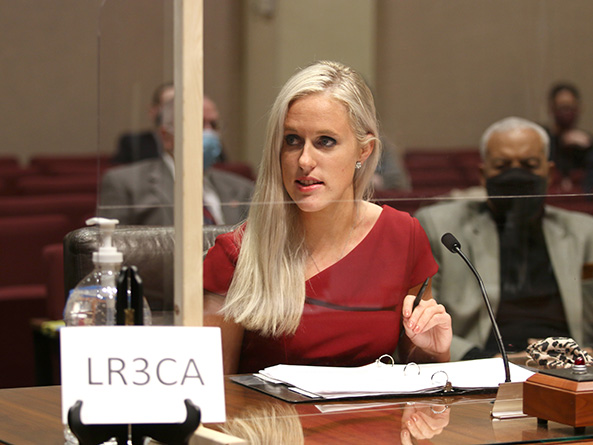 Nebraskans would decide if photo identification is required for voting under a constitutional amendment considered Feb. 17 by the Government, Military and Veterans Affairs Committee.

LR3CA, introduced by Sen. Julie Slama of Peru, would place a proposed amendment on the 2022 general election ballot asking voters if ID should be required at the polls.

“If approved by the voters of Nebraska, [the amendment] would add another layer of security to our elections — already implemented by 35 other states — without disenfranchising a single voter,” She said.

Nebraska Secretary of State Bob Evnen testified in support of the proposal. He said showing an ID is “common sense” and supported by a majority of Americans.

“Voter ID increases the accuracy of records at the polls, prevents wrongdoing and gives the voters additional confidence in the security and integrity of elections,” Evnen said.

Also testifying in support was Doug Kagan of Nebraska Taxpayers for Freedom. He said there is no way to know how much voter fraud exists without a system like voter ID to detect it.

“Consider it a vaccination process to prevent the spread of vote fraud,” Kagan said.

Preston Love, Jr. of Black Votes Matter testified in opposition to the proposal. He said an ID requirement would create an unnecessary burden on elderly and non-white voters, adding that the current system isn’t broken.

“The voters have confidence and if we keep persisting and implement an amendment for voter ID, some voters will lose their confidence,” Love said.

Sheri St. Clair of the League of Women Voters of Nebraska also testified in opposition. She said the proposal “promotes the myth of voter fraud” and would make it more difficult for Nebraskans to vote.

“This is at least the ninth time that such a proposal has been brought before the Legislature, yet we still have not had a conviction on voter-impersonation fraud in this state or even tangible proof of voter fraud,” St. Clair said.

The committee took no immediate action on LR3CA.