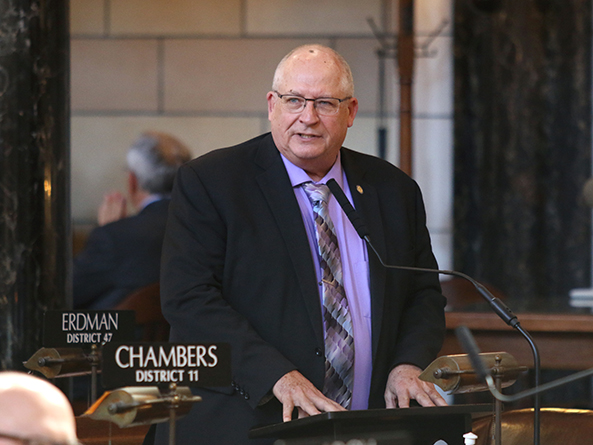 Expansion of broadband internet service in Nebraska was a priority for committee members this session.

Among other duties, the coordinator will encourage counties to appoint a broadband planning coordinator to assist counties in determining available broadband assets and explore the creation of broadband cooperatives in unserved or underserved areas of the state.

In entering into an agreement, an electric utility may not discriminate among commercial broadband suppliers in offering or granting rights to install or attach certain broadband equipment.

LB992 requires electric utilities to charge fees that are nondiscriminatory and requires the Nebraska Public Service Commission to establish a matching fund program to provide incentives for the deployment of fiber-optic cable to benefit public libraries.

Additionally, LB992 changes current law allowing a state agency or political subdivision to lease its unused fiber-optic cable to certain telecommunications carriers. Before a dark fiber lease becomes effective, it must be filed with the commission, which will cause notice of the lease and lease rates to be published.

The bill requires the commission to establish a safe harbor range of market rates for all dark fiber leases using a competitive price determination comparison.

Under LB992, 50 percent of the profit earned by an agency or political subdivision under certain dark fiber leases must be remitted to the Nebraska Telecommunications Universal Service Fund. The provision does not apply to a lease or a portion of a lease of dark fiber leased to exclusively serve unserved locations.

Finally, the bill provides that Nebraska Rural Broadband Task Force members appointed by the governor will serve two-year terms and may be reappointed.

The bill prioritizes resources and outreach in areas of the state that crowdsourcing, public feedback and other evidence suggests are unserved or underserved by high-speed internet.

Lawmakers approved the committee’s technical omnibus bill, LB944. Introduced by Lincoln Sen. Suzanne Geist, it allows owners to seek a refund on vehicle registration if a vehicle is lost to natural disaster.

The bill also allows the state Department of Motor Vehicles to discontinue issuance of certain specialty license plates if less than 500 new and renewal applications are received in any consecutive two-year period. The current threshold is 200.

Additionally, provisions of the following six bills are incorporated in LB944:
• LB768, introduced by Thurston Sen. Joni Albrecht, which incorporates updated federal regulations related to cabin trailers, low-speed vehicles, handicapped parking, vehicle registration and driver licenses and state identification cards, among others;
• LB785, introduced by Henderson Sen. Curt Friesen, which provides length, weight and load capacity exceptions for stinger-steered automobile transporters, towaway trailer transporter combinations, battery-powered vehicles, emergency vehicles and certain heavy-duty tow and recovery vehicles;
• LB831, introduced by Brainard Sen. Bruce Bostelman, which allows the state DMV to issue a salvage title for a vehicle manufactured prior to 1940 if it previously was titled as “junk;”
• LB976, introduced by Lincoln Sen. Kate Bolz, which adds neurological impairment to the list of criteria eligible for handicap parking passes within the exiting 200-foot mobility impairment standard;
• LB983, introduced by Bellevue Sen. Sue Crawford, which eliminates the one-point deduction from a person’s driver license for a speeding violation of up to five miles per hour over the speed limit; and
• LB1067, introduced by Bayard Sen. Steve Erdman, which allows all-terrain and utility-type vehicles to cross controlled-access highways of more than two marked lanes, if used for agricultural purposes.

Friesen introduced LB961, which would have imposed insurance and tax regulations on peer-to-peer car sharing programs, which connect consumers who temporarily want to use a vehicle with an eligible vehicle owner.

Under the bill, a peer-to-peer car sharing program would have assumed the liability of the vehicle owner for any bodily injury or property damage to third parties, uninsured and insured motorist benefits and personal injury prevention protection losses for the time period during which the vehicle was shared.

The bill was advanced to general file on an 8-0 vote but was not scheduled for debate.

LB761, sponsored by Adams Sen. Myron Dorn, would have increased an existing “50 Cents for Life” motor vehicle registration fee by 50 cents, which would bring the fee to $1 each year.

The additional revenue would have funded Simulation in Motion, a University of Nebraska Medical Center training simulation that prepares first responders and emergency medical technicians in rural Nebraska.

The bill failed to advance from committee.

Rules of the road

Farmers have expanded transportation options under a bill approved by lawmakers.

One of these permits allows a person transporting grain to exceed vehicle weight limits by 15 percent and length limits by 10 percent to transport grain from the field to storage, market or stockpile in the field or from stockpile to market or factory when failure to do so would mean economic loss.

The maximum load of seasonally harvested grain is increased for tandem axle, group of axles or on the gross weight by 15 percent for transport from farm storage to market or factory without a permit.