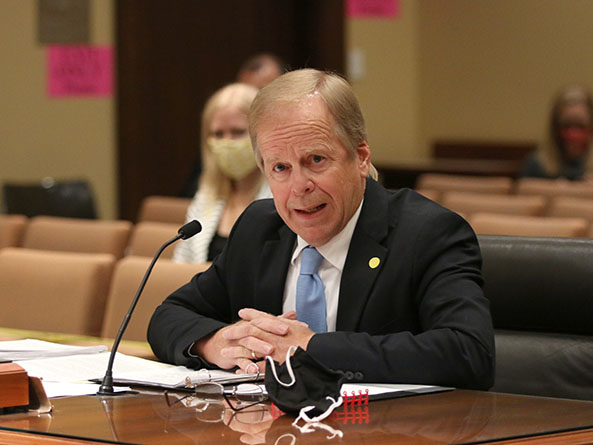 The Revenue Committee held a special hearing July 27 on a proposal that would decouple Nebraska’s tax code from federal changes meant to provide economic relief to businesses affected by the coronavirus pandemic.

Because Nebraska conforms to federal tax law on a rolling basis, it automatically incorporated into its tax code the Coronavirus Aid, Relief and Economic Security Act changes passed by Congress in March.

Sen. Tom Briese of Albion introduced an amendment to the bill that would decouple Nebraska from certain CARES Act provisions—including one that temporarily removes an excess business loss limitation for passthrough entities—that he said would reduce state tax revenue by approximately $242 million over the next three years.

Briese said he introduced the amendment to ensure that the Legislature can fund property tax reform, which he called the “marquee issue facing our state.”

“I would submit that the dollars we’re targeting [in the amendment] could be more beneficial to economic growth when dedicated to property tax relief than if they’re simply added to the roughly $1 billion in federal income tax relief,” he said.

Adam Thimmesch, an associate professor at the University of Nebraska College of Law, testified in support of the amendment on his own behalf. He said that decoupling—as two other rolling conformity states have done so far—would allow Nebraska to control its tax base rather than assuming that the federal changes reflect what’s best for the state.

“The federal tax cuts at issue … help the people who get them,” Thimmesch said, “but they’re not targeted at the Nebraska companies who need relief the most.”

Because many of the changes are retroactive, she said, taxpayers could receive refunds based on losses incurred before the pandemic and economic crisis began.

“Those losses also are often based on asset depreciation and other only-on-paper accounting measures and so don’t act to necessarily reflect actual monetary losses,” Friesen Milone said.

Bryan Slone, president of the Nebraska Chamber of Commerce and Industry, testified in opposition to the proposal on behalf of the chamber and the Nebraska Bankers Association.

He said the excess business loss provision and others are meant to create essential liquidity for businesses that were distressed even before the pandemic-related economic downturn.

“To increase taxes on these particular industries right now to the tune of $180 or $220 million in the middle of this crisis … makes no sense in terms of what we’re trying to do to maintain jobs and the economy,” Slone said.

Also in opposition was Sarah Curry, policy director at the Platte Institute. If the proposal is enacted, she said, it could lead to more business closures and layoffs this year, slowing the state’s economic recovery.

“The measures in the CARES Act are intended to help businesses and jobs survive this pandemic,” Curry said. “The amendment, in effect, is a tax increase on businesses that are trying to survive.”

Curry said she believes that the new federal relief bill being prepared by Congress will allow states to use federal dollars to offset general fund revenue losses caused by tax code conformity.

The committee took no immediate action on the amendment.