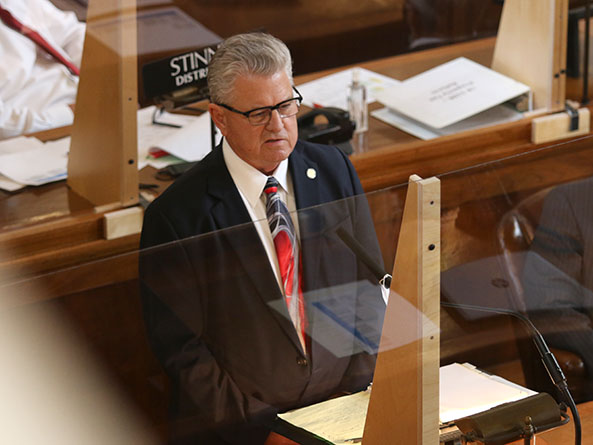 Lawmakers continued second-round debate July 22 on a proposal to replace the state’s current business tax incentive program, the application period for which is set to end this year.

Kolterman introduced an amendment on select file that would replace the bill. He said the proposal includes additions and changes to the original proposal made at the request of several senators.

Businesses seeking to expand will not consider Nebraska if it does not have a business tax incentives program, he said.

“We can find the money for all of our priorities, including property tax relief,” Kolterman said, “but we have to put politics aside and send a strong message to companies that Nebraska is open for business.”

Under the proposal, qualifying businesses would receive a varying combination of incentives—wage credits, income tax credits, sales and use tax refunds and exemptions and personal property tax exemptions—based on their level of capital investment and the number of employees they hire at a minimum qualifying wage.

The amendment would require qualifying taxpayers to offer employees the opportunity to enroll in minimum essential health coverage under an eligible employer-sponsored plan.

Taxpayers seeking incentives would apply to the director of the state Department of Economic Development. The director would approve applications and enter into agreements with taxpayers to provide incentives once they have attained the required employment and investment levels.

The proposal would require the director and the state tax commissioner to submit an annual report to the Legislature listing the agreements signed in the previous year, the agreements still in effect, the identity of each taxpayer who is party to an agreement and the qualified location or locations.

The amendment also includes provisions meant to cap the amount of incentives that could be offered each year. The director could not approve applications that would include refunds or credits for a calendar year in which a “base authority” is projected to be exceeded unless the governor approves a request for additional authority.

An earlier amendment would have allowed the Legislature’s Executive Board to approve a request to exceed the base authority. An attorney general’s opinion said that approach would encroach on executive power and would be an unlawful delegation of the full Legislature’s authority.

The new proposal also includes a provision meant to encourage “key employers,” or those with at least 1,000 equivalent employees, to retain jobs in Nebraska when new owners of those companies are considering moving all or some of those jobs out of the state.

Finally, the amendment includes amended provisions of Kolterman’s LB1084, which would require the state to provide $300 million in matching funds for a potential $1.6 billion academic hospital and all-hazards disaster response facility at the University of Nebraska Medical Center.

Kolterman said the project could result in more than 40,000 construction jobs over 10 years and 8,700 new high-paying jobs when completed.

Sen. Matt Williams of Gothenburg supported the proposal, saying that the state’s current business tax incentive programs have benefited his community by creating new jobs and encouraging companies to invest there. Nebraska cannot grow its economy without a strong business tax incentives program, he said.

“[The Nebraska Advantage Act] sunsets at the end of this year,” he said, “and if we hang out the ‘we are not open for business’ sign, that will hurt us immensely.”

Sen. Steve Erdman of Bayard opposed the bill and filed a motion to bracket it, which effectively would end debate on it this session. He said the state’s business tax incentive programs forgo more state revenue than they generate through economic development.

Albion Sen. Tom Briese said he would not vote for a business tax incentive program unless it is part of a larger package that includes property tax relief. Additionally, he said the Legislature cannot be certain whether business tax incentives actually incent businesses to locate and expand in Nebraska.

“Are we throwing taxpayer money away by rewarding conduct that would have occurred anyway?” Briese said.

After 90 minutes of select file debate, the Legislature moved to the next item on the agenda without voting on Erdman’s motion, the amendment or the bill. Per a practice implemented by Speaker Jim Scheer, the sponsor of a bill that is facing a potential filibuster must demonstrate sufficient support for a cloture motion before the measure will be scheduled for additional debate.