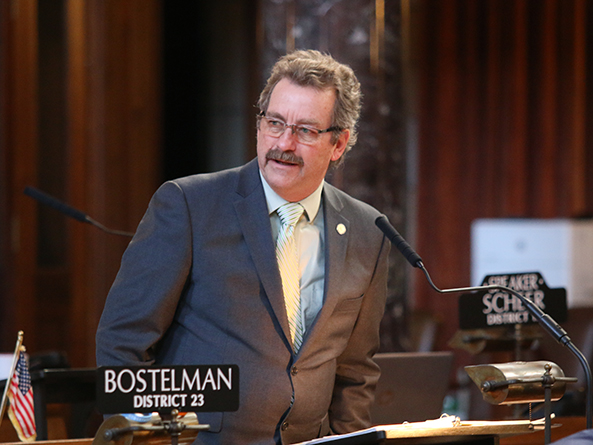 A person assisting a child believed to be in imminent danger would be eligible for legal immunity under a bill advanced from general file March 4.

LB832, as introduced by Brainard Sen. Bruce Bostelman, would provide criminal and civil immunity for a person who removes a child—who they reasonably believe to be in imminent danger—from a locked motor vehicle, as long as they act in good faith.

Bostelman said he introduced the bill after a child in his district mistakenly was left in a hot car and died.

“According to the National Highway Traffic Safety Administration, heat stroke is not about irresponsible people potentially leaving children in cars,” he said. “Most cases occur when a child is mistakenly left [behind] or enters into a vehicle unattended.”

State law currently includes a “good Samaritan” provision that extends legal immunity to a person rendering aid at the scene of an accident or other emergency. The committee amendment would expand the definition to include entering a vehicle to remove a child to avoid immediate harm.

“Our hope is that by [advancing] this bill, we can raise awareness so that people are looking in cars in the summer and they don’t hesitate for a second to break a window to get to a child that might otherwise perish,” he said.