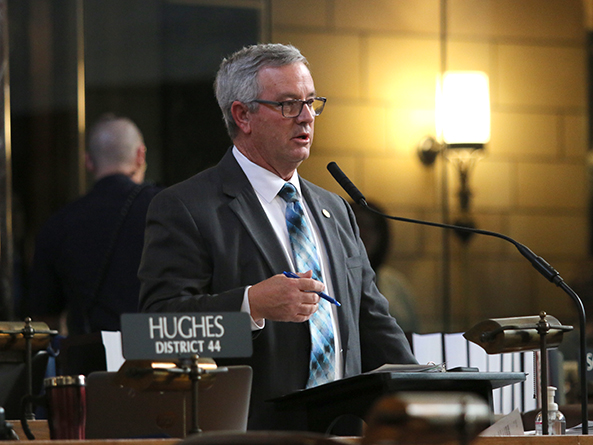 Nebraska’s public power districts could develop, manufacture and sell certain biofuels in an effort to reduce their greenhouse gas emissions under a bill advanced from general file March 4.

Hughes said the proposal would allow public power districts to research biofuel applications that could reduce their power generation facilities’ carbon dioxide emissions, which are produced when fossil fuels such as coal, oil and natural gas are burned.

“All we’re asking for in this bill is to give our public power sector … a little more flexibility of looking at ways to reduce the carbon footprint of generating electricity,” he said.

A Natural Resources Committee amendment, adopted 40-0, would allow public power districts to develop, manufacture, use, purchase or sell at wholesale “advanced” biofuels and their byproducts and other fuels and fuel byproducts so long as those activities help offset greenhouse gas emissions.

Hughes said advanced biofuels are those made from feedstocks, such as grass or manure, that are not food products.

Sen. Mike Moser of Columbus supported the bill. He said it would give the Nebraska Public Power District the opportunity to partner with a private company in a project that could potentially reduce its carbon dioxide emissions.

Sen. Justin Wayne of Omaha opposed the bill. He said it would allow public power districts to compete with private utilities in the natural gas industry.

Senators voted 44-1 to advance the bill to select file.