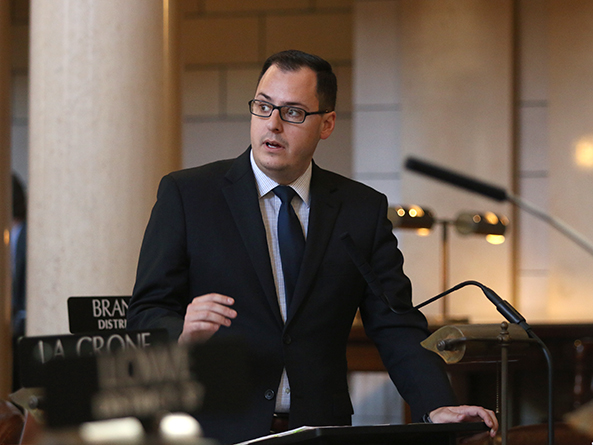 Nebraskans could deduct employer contributions to their state college savings accounts from their state income taxes under a bill advanced from the first round of debate March 3.

The Nebraska Education Savings Trust Plan provides tax-advantaged 529 accounts meant to encourage saving for postsecondary education costs. Contributions grow tax-deferred, and withdrawals are exempt from state and federal taxes as long as they are used for a beneficiary’s qualified higher education expenses.

Gretna Sen. Andrew La Grone, sponsor of LB1042, said the bill would ensure that Nebraska taxpayers do not have to pay state income tax on employer contributions to their NEST accounts.

The deduction would be for taxable years beginning on or after Jan. 1, 2021, and could not exceed $5,000 for those married filing separately or $10,000 for other filers.

LB1042 also would prohibit any state agency that provides benefits or aid to individuals based on financial need from taking employer contributions into account when determining an individual’s income.

Additionally, LB1042 would eliminate the provision in current law that allows only an account’s participant, or registered owner, to take a state income tax deduction equal to contributions they make to their account, up to $5,000 for those married filing separately or $10,000 for other filers.

As introduced, LB1042 would allow owners to use NEST accounts to pay for costs incurred for participation in certain apprenticeship programs and the principal or interest on any qualifying education loan of the designated beneficiary or sibling of the beneficiary.

Sen. Adam Morfeld of Lincoln introduced an amendment, adopted 32-0, that would include amended provisions of his LB1083.

The proposal would update the Meadowlark Act, under which a NEST account is opened for each Nebraska newborn, to allow the state treasurer to credit private qualified contributions to the Meadowlark Endowment Fund or to accounts opened under the program, at the direction of the donor.

Morfeld said the change would allow certain charitable foundations that have rules against funding endowments to contribute to the program.

Lincoln Sen. Patty Pansing Brooks introduced an amendment, adopted 36-1, that would prohibit any money accrued by participants in the program fund from being used to pay expenses associated with attending kindergarten through 12th grade.

It also would prohibit private contributions to the Meadowlark program from being used to pay those expenses.

Lawmakers voted 42-0 to advance the bill to select file.