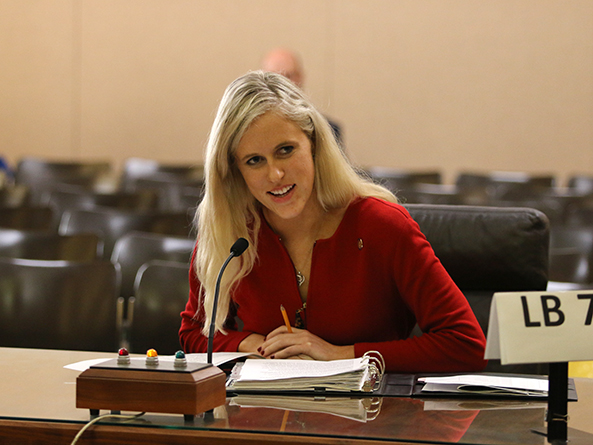 The Judiciary Committee heard testimony Feb. 26 on a bill that seeks to expand drug enforcement in the state.

LB792, sponsored by Peru Sen. Julie Slama, would allow quantities of cocaine, base cocaine, heroin, amphetamine or methamphetamine to be combined for two or more controlled substance violations.

Rural Nebraska still struggles with extensive abuse of methamphetamine, Slama said, and the bill could help put dealers behind bars.

“Our current statutory framework is very strong in the state of Nebraska with mandatory minimum [sentences] in place for [possession] in excess of 10 grams,” she said. “But many who get busted for dealing meth know how to play the system and keep their dealings just below the threshold of 10 grams per transaction to avoid a felony charge [sufficient for] a mandatory minimum.”

The bill would clarify that the violations must occur in approximately the same location over a time period not to exceed 90 days and be attributable to a single scheme, plan or conspiracy.

Corey O’Brien, speaking on behalf of the state attorney general’s office, supported LB792. It would give prosecutors additional options to charge drug dealers, he said.

Also supporting the bill was Lynn Gray of Nebraska City. Her son died after taking a toxic combination of methamphetamine and fentanyl, she said, but the woman who gave him the drugs remains free.

“This repeated offender killed someone, went right back to drug dealing, got arrested not once but twice in one week and now is free to continue making unfair and illegal profit,” Gray said. “We must arrest the dealer, not the addict.”

Spike Eickholt, representing the Nebraska Criminal Defense Attorneys Association, opposed the measure. He said it could lead to unfair application of the law.

“The impact of this law is that it will allow prosecutors—at their discretion—to aggregate amounts to get to the mandatory minimum [level of possession],” Eickholt said.

The committee took no immediate action on LB792.