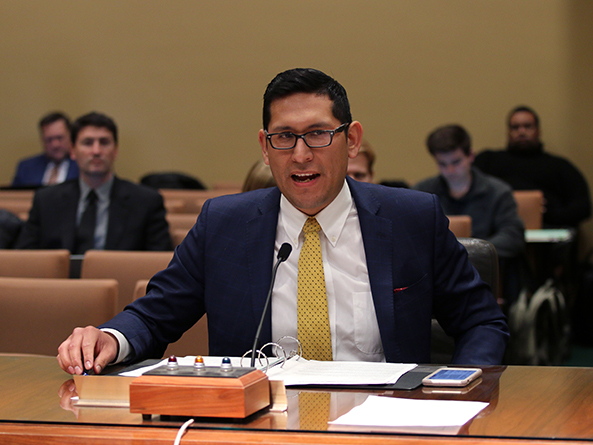 The state Department of Education would develop an app-based system for public schools to notify users of active shooters and other emergencies under a bill considered Feb. 25 by the Education Committee.

LB1156, introduced by Omaha Sen. Tony Vargas, would require the department to make a statewide panic button program available to public elementary and secondary schools by Sept. 30, 2020. The department would assume the cost of implementing the technology.

Vargas said an integrated system that, at the touch of a button, would notify first responders and school staff of an emergency could save lives in many situations, not just active shooter events.

In developing the program, the department would contract with one or more technology providers that have successfully deployed technology for a school panic button program on a statewide basis.

The technology would have to be usable through a mobile telephone app-based system that is able to be integrated with a public safety answering point.

The system would have to be able to place a standard voice call to 911; allow the 911 system to send follow-up messages; and send short message service text messages, email and push notifications to authorized users at a school, among other requirements.

The system also would have to automatically present information from a school, including floor plans and building information, to the 911 call taker when a 911 call or panic button activation occurs.

LB1156 states legislative intent to appropriate $2 million to the department for fiscal year 2020-21 to implement the bill.

Eisenman said the systems are not meant to replace or duplicate the 911 system but to allow for a faster and more effective emergency response and to immediately inform teachers, administrators and other school staff of the nature of an emergency.

Dan Schleusener testified in opposition to LB1156 on behalf of the Buffalo County Sheriff’s Office and the Nebraska Sheriffs’ Association. Sheriffs do not oppose the concept of a panic button system, he said, but the bill would limit the number of vendors that could bid for the proposed project.

“We would like to see something more … like a grant system, which would be based on a per-pupil cost per school district to ensure equitable funding and allow these localities that already have proven and established relationships [to] determine what fits best for them,” he said.

Nick Paden testified in opposition to the bill on behalf of Diode Technologies, a Nebraska-based company that sells staff alert systems and pepper gel canisters for public elementary and secondary schools. He said LB1156 would prevent smaller companies like Diode from being considered for the program.

Maddie Fennell, executive director of the Nebraska State Education Association, provided neutral testimony on the bill. Teachers would appreciate another tool they could use in an emergency, she said, but several issues would need to be addressed before the program could be implemented.

For example, Fennell said, schools cannot require employees to download an app on a personal device, some schools restrict teachers’ access to phones during the school day and others lack reliable cell service or internet connectivity.

The committee took no immediate action on LB1156.