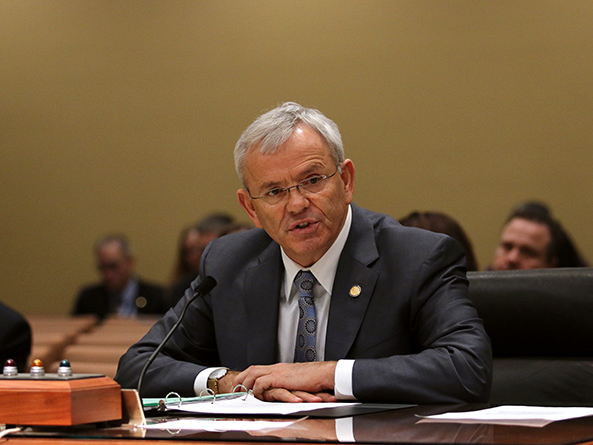 Public and private schools in Nebraska would be required to create a policy that prohibits sexual contact between a teacher and a student under a bill heard Feb. 11 by the Education Committee.

LB1080, introduced by Omaha Sen. Steve Lathrop, would require the school board or board of education of each school district and the governing authority of each private, denominational or parochial school to adopt a policy regarding appropriate relationships between a student and a school employee, student teacher or intern.

Lathrop, chairperson of the Judiciary Committee, said they will hold hearings next week on four bills meant to address the most severe forms of teacher misconduct that are not covered by state statute. He said LB1080 is meant to ensure that schools are prepared to “prevent, detect and report” inappropriate conduct by teachers and other school employees toward students.

“My hope would be that we can address this issue from both angles,” Lathrop said.

The proposed policy would prohibit any school employee or any student teacher or intern from engaging in grooming, a term Lathrop said is not easily defined. He said it could be recognized as a pattern of behavior intended to cultivate a closeness between a teacher and a student that creates the opportunity for a sexual relationship.

“I’ll leave it to the school districts to try to define what those activities are,” Latrhop said. “I think most people who see it happening know what it is.”

The policy would prohibit any relationship that involves sexual contact or penetration from occurring between a student and a school employee or a student teacher or intern while a student is enrolled and for a minimum of one year after a student graduates or ceases enrollment.

Additionally, the policy would describe the preferred methods for a school employee, student teacher or intern to use in communicating with students, including cell phones, email or social media platforms.

Lisa Albers, a Grand Island Public Schools board member, testified in support of LB1080 on behalf of the Nebraska Association of School Boards.

Although many school district policies already address appropriate relationships between a teacher and a student, she said, LB1080 would ensure that each district adopts a policy with minimum standards that clarify boundaries for school employees.

Albers said a substitute teacher groomed her 17-year-old daughter and manipulated her into having sex with him two weeks after she graduated from high school. The teacher left the district and lost his teaching license, Albers said, but police told her they could not investigate because the age of consent in Nebraska is 16.

“While we will never know whether a stronger school policy would have prevented this incident,” she said, “we must send a message to school employees that actions like his will have consequences.”

Maddie Fennell, executive director of the Nebraska State Education Association, also testified in support. She said the bill is one of several the NSEA supports this session that are intended to address inappropriate relationships between school employees and students.

“There is no acceptable reason that an educator in a … school district should be in a sexual relationship with a student, regardless of the age of the student,” Fennell said.

She emphasized the importance of requiring each district to adopt a clearly defined communication policy.

“With the advent of social media,” Fennell said, “each school district must develop and clearly communicate to their staff how and using what medium they may communicate with students.”

Jack Moles testified in support of LB1080 on behalf of the Nebraska Rural Community Schools Association. The provision prohibiting a sexual relationship between a teacher and a student for a minimum of one year after the student’s graduation would be difficult for administrators to monitor and control, he said, “but we do believe that that clear separation does need to be created.”