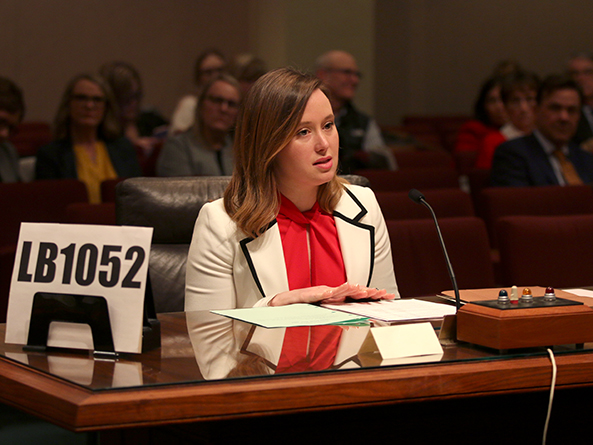 Medicaid recipients could not be denied certain prescription medication coverage under a bill discussed Jan. 30 by the Health and Human Services Committee.

Administrators at mental health treatment facilities throughout Nebraska have reported that some residents were admitted after losing Medicaid coverage for drugs that had successfully managed their conditions, Wishart said.

Wishart said she introduced LB1052 after learning about a mentally ill man named Curtis. He overcame suicidal ideation in 2006 and was stable and independent for 11 years, she said, benefitting from a drug that was later removed from the preferred drug list. Unable to afford the medication, Curtis became delusional, attempted suicide and moved into an assisted living facility, she said.

Marlene Wagner, Curtis’ sister, testified in support of the bill. She said Curtis is back on his original medication and, although he has shown signs of recovery, he is not well enough to live on his own.

“Imagine if Curtis had not had an advocate. He may have harmed himself or someone else. He may have ended up dead or in jail. All because a managed care organization made a short-sighted decision,” Wagner said.

Joni Cover, CEO of the Nebraska Pharmacists Association, also supported LB1052. She said it is common for a patient like Curtis to learn from their pharmacist that a medication they’ve been prescribed is no longer covered by Medicaid.

“It’s really health care providers that should be practicing medicine and not payers,” Cover said.

Beth Ann Brooks, testifying on behalf of the Nebraska Medical Association, the Nebraska Association of Behavioral Health Organizations and the Regional Council of the American Academy of Childhood and Adolescent Psychiatry, also spoke in support of the bill.

Finding effective mental health medication is difficult and varies by patient, she said. Once a successful drug is found, patient health outcomes, and not cost, should be the primary consideration, Brooks said.

Carisa Schweitzer Masek, pharmacy director for the DHHS Division of Medicaid and Long-Term Care, testified against LB1052. She said the bill would violate federal law that requires drug utilization reviews, causing the state to lose $1.2 million in federal Medicaid funding.

“These are, as you all know, some of the most vulnerable patients. These are also some of the most toxic drugs,” she said. “Due to the toxicity risk, [the current review process] needs to be in place to do that double-check and say ‘are there other drugs that this patient could be on that would cause a problem?’”