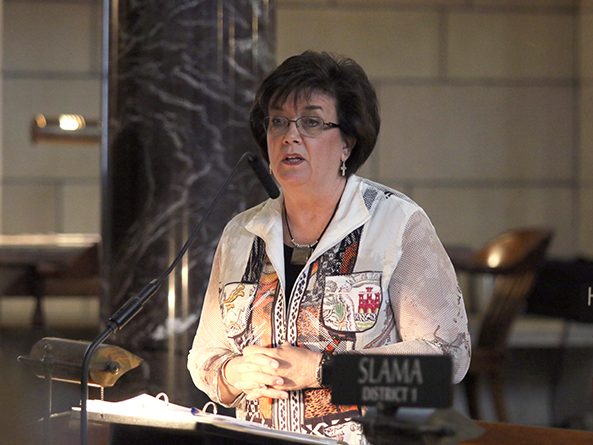 A bill that would require medical professionals to provide additional information to women seeking abortions advanced from general file May 7 after a successful cloture vote.

LB209, as originally introduced by Thurston Sen. Joni Albrecht, would require medical providers to inform a patient seeking an abortion that it may be possible to reverse a medication abortion if the patient changes her mind.

A Judiciary Committee amendment, adopted 39-3, replaced the bill. Under the amended bill, medical providers would be required to inform a woman seeking an abortion that the first of two drugs administered during a medical abortion—mifepristone—is not always effective in ending a pregnancy.

Albrecht said it is a woman’s right to have complete information about the medical abortion process.

“I can’t emphasize enough the importance of informing these women about all of their options,” she said. “When they decide to pursue this medical abortion, physicians have an ethical and professional responsibility to provide their patients with this information.”

In addition to other information already required under existing law, the committee amendment would require a provider to inform a woman that if she changes her mind and wants to continue a pregnancy after taking mifepristone, she may consult the state Department of Health and Human Services’ website.

The amendment would direct DHHS to publish information on the agency’s website about the effectiveness of mifepristone in ending pregnancy as well as contact information for medical assistance.

Omaha Sen. Sara Howard introduced an amendment, adopted 35-0, that would require DHHS to collect data from medical providers every time a woman attempts to continue a pregnancy after taking an initial dose of mifepristone. The data collected would include the woman’s age, facility location, name of the attending physician, any complications experienced and other relevant medical information.

The information collected under the Howard amendment would be included in the annual DHHS report on abortion in Nebraska.

Sen. Megan Hunt of Omaha introduced a motion to recommit LB209 to the Judiciary Committee.

“The amended bill still interferes in the doctor-patient relationship,” she said. “It expands government by requiring doctors to tell patients something that they already tell them.”

After six hours of debate spanning three days, Albrecht filed a motion to invoke cloture, or cease debate and vote on the bill. The motion was adopted 37-5. Thirty-three votes were needed.

Senators then voted 37-9 to advance LB209 to select file.