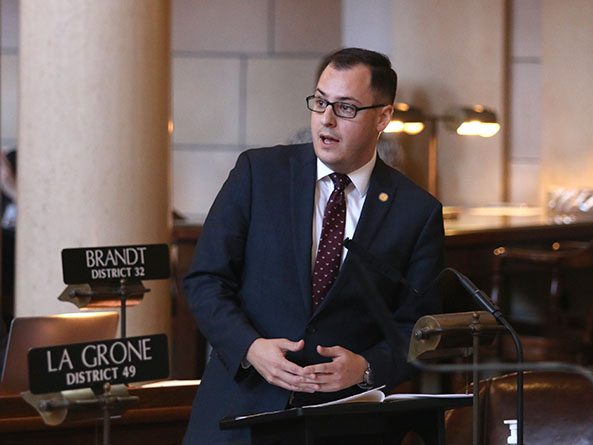 Lawmakers gave first-round approval April 24 to a bill intended to make it easier for families and others to contribute to a beneficiary’s state college savings plan.

The Nebraska Education Savings Trust Plan provides tax-advantaged 529 accounts meant to encourage saving for postsecondary education costs. Contributions grow tax-deferred, and withdrawals are exempt from state and federal taxes as long as they are used for a beneficiary’s qualified higher education expenses such as tuition, books, supplies and room and board.

Currently, individuals other than the plan’s participant, or registered owner, are ineligible for the state income tax deduction on contributions they make to NEST accounts. Annual deductions are limited to $5,000 for those married filing separately and $10,000 for other filers.

As introduced by Gretna Sen. Andrew La Grone, LB470 would allow “nonparticipants” to claim the state income tax deduction on contributions they make to a beneficiary’s NEST account and would eliminate the cap on deductions for contributions.

La Grone said his proposal would make it simpler to use Nebraska’s 529 accounts to save for college by allowing an individual other than a plan’s participant to receive the income tax deduction for contributions to that plan, rather than requiring him or her to open a separate account in order to receive the deduction.

“No one who is not currently entitled to a deduction under the current law will be able to get one under my bill,” he said. “It simply streamlines the process so [contributions] can go into one account.”

A Revenue Committee amendment, adopted 37-0, would replace the bill. It also would allow nonparticipants to contribute to NEST accounts but would leave the cap on deductions in place.

La Grone introduced an amendment, adopted 35-0, that would replace the committee amendment. Rather than add language to a section of current law regarding nonparticipants, he said, the amendment would remove language referring to participants, allowing for multiple individuals, including employers, to claim the tax deduction for those contributions.

McDonnell’s proposal would exempt military housing units from property taxation but would require the owners of those dwelling complexes to make payments in lieu of taxes to local school districts, the county in which the complex is located and an infrastructure maintenance fund used for capital repairs, maintenance and improvement of the complex.

Under Wayne’s measure, an individual could claim an income tax deduction against contributions an employer makes to his or her NEST account. The amendment also would prohibit a government program administered by any state agency that provides benefits or aid to individuals based on financial need from taking employer contributions into account when determining a person’s income.

Wayne said this would ensure that employer contributions to low-income Nebraskans’ NEST accounts would not cause those individuals to lose certain state benefits.

Sen. Carol Blood of Bellevue questioned how LaGrone’s measure would interact with LB610, introduced by Omaha Sen. Brett Lindstrom. Under that bill, an employer could apply to the state treasurer for an incentive payment of up to $2,000 for contributing to an employee’s NEST account.

If both measures pass, Blood said, an employer could receive both the incentive payment and the tax deduction for contributions.

Lincoln Sen. Patty Pansing Brooks also questioned how the proposal’s provisions relate to those of LB610 and several other 529-related bills introduced this session, as well as how those measures would be funded.

“Maybe this isn’t obfuscation, but it feels like it,” she said. “It feels like we can’t get the whole story.”

Senators voted 39-1 to advance the bill to select file.