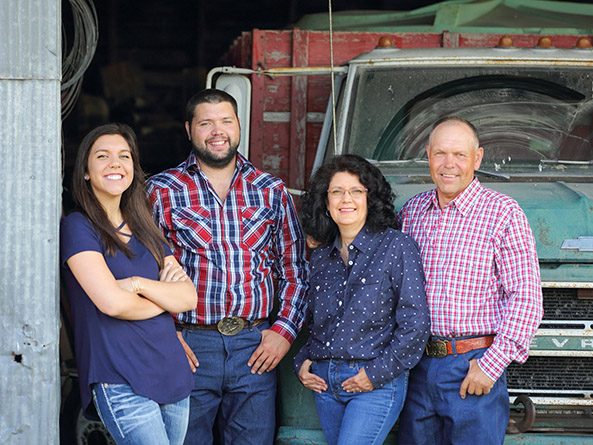 Above: Sen. Tom Brandt on the family farm with wife Sandra and their children Mariah and Evan.

Sen. Tom Brandt never envisioned being a politician. The fourth-generation farmer from Plymouth was content working his 1,100 acres, but the misconceptions that some Nebraskans had about rural life bothered him.

After filing his candidacy just before the deadline, Brandt took up the unfamiliar tasks of hiring a campaign manager, knocking on doors and walking in parades. For a man who’s slapped bulls and stared down angry rams–“I had one knock me flat one time,” Brandt said—it was a learning experience.

“It was a hoot,” Brandt said. “I learned that is if someone writes you a check for $25, they’re going to tell you what to do.”

It wasn’t the first time he’d stepped out of his comfort zone. When Brandt graduated from the University of Nebraska in 1982, he’d hoped to work for a company that manufactured agricultural implements, but the prolonged farm crisis meant virtually nobody was hiring, even his family.

“In 1982, my dad said ‘We got enough work for three people and not enough money for one, figure it out,’ ” Brandt said.

He took a job as an industrial engineer with Oscar Meyer-Louis Rich.

“I can build you a meatpacking plant,” Brandt said.

And he did so in places like Dakota City, West Liberty, Iowa and Amarillo, Texas. It was at that last stop where he met Sandra Rodriguez, a native of El Paso. The two eventually married and moved to Nebraska.

“The first few winters were quite a struggle,” Brandt said. “There’s not a lot of snow in El Paso.”

The couple has two kids—Evan, who ran the family farm while Brandt was campaigning, and Mariah, who is a captain in the U.S. Air Force. She’s had tours in Afghanistan and Kuwait, and is currently on her third tour overseas.

“She can’t tell me anything,” Brandt said. “If I can find where she is on Google, I can make all the assumptions I want but she won’t confirm anything.”

Brandt would love to provide opportunities for Evan and Mariah’s generation; improving rural internet access is a must.

“When you don’t have adequate broadband in rural areas, the young people are not going to move home. They need broadband to telecommute, to shop, to do their homework, to be entertained; it’s critical infrastructure,” he said. “I can buy a new combine that has NASA-type technology that we can’t use because we don’t have an adequate cloud.”