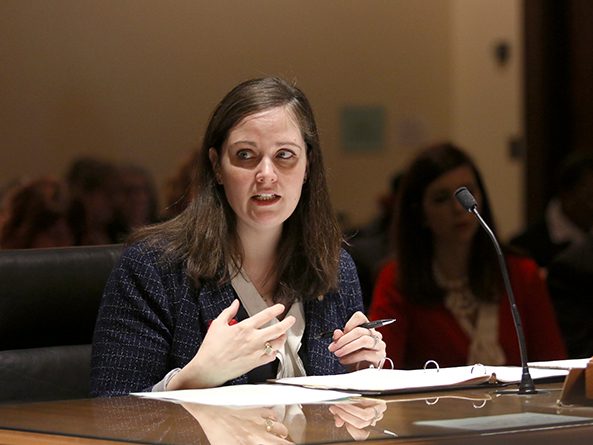 The Executive Board considered four proposals regarding the Legislature’s redistricting process Feb. 14.

Currently, the Legislature is responsible for drawing new governmental boundaries every 10 years after the decennial census for districts pertaining to the U.S. House of Representatives, Legislature, Public Service Commission, University of Nebraska Board of Regents and the state Board of Education.

LB466, introduced by Omaha Sen. Sara Howard, would adopt the Redistricting Act. She said the bill would codify in state law the legislative resolution that guided the last redistricting process in 2011 and provide consistency going forward.

Among other provisions, the act would require that new district maps be drawn using state-issued computer software and politically neutral criteria, including:
• equal population;
• contiguous districts;
• no political affiliation data;
• no previous voting data;
• deference to county and municipal lines when appropriate; and
• only data and demographic information obtained from the U.S. Bureau of the Census.

The Redistricting Committee of the Legislature would be required to hold at least one public hearing in each congressional district to receive input on the maps. The committee then would deliver a report on those hearings to the Legislature.

The director of the Office of Legislative Research would deliver initial versions of the maps to the Legislature, to be placed on general file no later than 15 calendar days after the director receives the federal decennial census data from the U.S. Bureau of the Census.

No changes other than corrective amendments would be allowed to the initial version of the maps. The Legislature would have three attempts to pass redistricting maps. If unsuccessful, the act provides for the governor to the call a special session within 30 days after adjournment of the regular legislative session and the redistricting committee would begin the process again.

Testifying in support of all four measures was Danielle Conrad, executive director of the ACLU of Nebraska. Taken together, she said the bills would increase citizen input, reduce partisanship and demonstrate respect for minority voting rights.

“We believe that each piece of legislation helps to ensure increased transparency,” Conrad said.

Also considered was LB253, sponsored by Omaha Sen. John McCollister, which would establish an Independent Redistricting Citizen’s Advisory Commission, to be established by Jan. 30 of each redistricting year.

McCollister said the proposal would address concerns about improperly delegating legislative authority, which caused a similar bill to be vetoed by the governor in 2016.

“It’s up to the Legislature to make the final decision about the six district maps,” he said.

To be eligible for service on the commission, a person must be a Nebraska resident and a registered voter who, at the time of appointment, has not changed political party affiliation within the previous 24 months.

Residents registered as lobbyists within the previous 12 months, public officials, candidates for elective office and those holding a state or national political party office would not be eligible. Also ineligible would be an individual who is a relative of or employed by a member of Congress, a constitutional officer or an employee of the University of Nebraska.

The director of the Legislative Research Office would use census data to assign an ideal district population to each type of district and develop base maps for the commission to use in developing redistricting plans.

The chairperson of the Executive Board then would introduce a bill for each redistricting plan adopted by the commission within two days of delivery of the final maps. The bills would be placed directly on general file.

Within five legislative days, if any of the bills fail, do not pass or are vetoed by the governor, a new redistricting plan would be prepared.

Matt Maly, vice chairperson of the Libertarian Party of Nebraska, testified in opposition to LB253. He said the bill as written would exclude a large number of Nebraskans who are not affiliated with either the Republican or Democratic parties from participation in the commission.

“It goes against the whole idea of the bill, which is to make our democracy more strong and more fair,” he said.

Maly suggested simply changing the membership from each caucus to one person from the majority party and one who is not affiliated with that party. This would capture a broader range of Nebraskans while still fulfilling the goal of having a commission not dominated by the state’s majority party, he said.

Two other bills also were considered.

LB261, sponsored by Bennington Sen. Wendy DeBoer, would require the use of state-issued computer software to create any map that is part of the redistricting process.

LB467, sponsored by Omaha Sen. Tony Vargas, would prohibit consideration of the political affiliation of registered voters, demographic information other than population figures and results of previous elections when drawing boundaries for legislative districts. Information required by federal law or the U.S. Constitution would be exempted under the bill.

Westin Miller of Civic Nebraska testified in support of both bills, saying they would improve the integrity of—and public trust in—the redistricting process.

No opposition testimony was offered on LB466, LB261 or LB467 and the committee took no immediate action on any of the proposals.