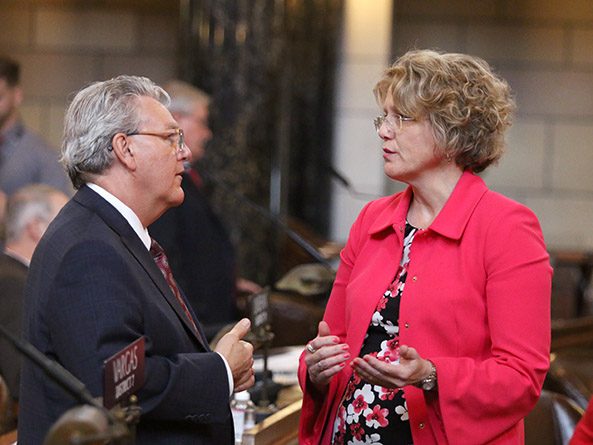 After considering several changes, senators adopted their permanent rules Jan. 23. The rules of the Legislature govern the legislative process and are adopted at the beginning of each biennium.

Among the changes brought forth by the Rules Committee was a proposal to give the Legislature’s Planning Committee authority to prioritize one bill per session within its jurisdiction. The rule change was adopted on a 25-17 vote.

The Rules Committee also advanced a proposal that would have formalized the amount of debate required before a cloture motion could be accepted by the presiding officer of the Legislature. A successful cloture motion ceases debate and forces a vote on a bill.

Under the proposal, a cloture motion could be made only after six hours of debate on general file, three hours on select file and one and a half hours on final reading. These time limits reflect the current guidelines used by Speaker Jim Scheer of Norfolk.

Lincoln Sen. Kate Bolz, who brought the proposal to the Rules Committee, urged its adoption.

“Having full and fair debate on this floor [allows] our ‘second house’ to follow the debate, understand and engage in the discussion that we’re having about important policy issues,” Bolz said.

Omaha Sen. Sara Howard spoke in support of the proposal, saying it is important to set a precedent for future legislators to follow once the current speaker is no longer in office.

“I do think future legislatures will look at changes we made in the rules and give them some sort of deference,” she said. “Codifying Speaker Scheer’s common practice would be an appropriate solution for how we’re handling cloture currently.”

Sen. Mike Hilgers of Lincoln opposed the measure. He said continuing to allow the speaker of the Legislature leeway in managing the legislative agenda is necessary.

“We have a limited amount of time in this body and a lot of work to do,” Hilgers said. “We should give discretion to the speaker on how to move things through the body.”

Finally, senators considered a proposal by North Platte Sen. Mike Groene that would have required public votes for election of the Speaker of the Legislature and chairpersons of all 14 standing committees.

Currently, these votes are conducted by secret ballot.

Groene said voters expect transparency from their representatives on all matters.

“You should be proud of who you vote for,” he said. “You should not only be able to defend it with your colleagues, but your constituents.”

Sen. Steve Lathrop of Omaha opposed the change. He said there is no compelling reason to change the process for electing legislative leadership.

“I look at the rules as the collective wisdom of the people who have served in this institution before us,” Lathrop said. “This system of choosing chairmen by secret ballot has worked for this institution for decades.”

The Groene proposal was defeated on a 22-25 vote. Following adoption of an additional technical change, the rules were adopted 36-9.