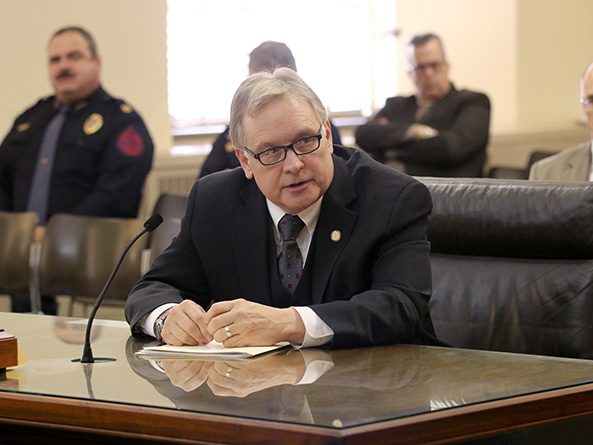 Texting while driving would be considered a more serious offense under a bill heard by the Transportation and Telecommunications Committee Jan. 23.

LB671, introduced by Omaha Sen. Bob Krist, would change the offense of operating a handheld wireless device from a secondary to a primary offense, meaning a driver could be stopped by law enforcement for using a phone while driving.

“This bill would create safer driving conditions in our state and hold young, distracted drivers more accountable,” he said.

A law enforcement officer, firefighter, ambulance driver or an emergency medical technician performing in his or her official capacity would be exempt from the prohibition on wireless devices. Similarly, a person operating a motor vehicle in an emergency would be exempt.

LB671 also would change from a secondary to a primary offense an existing law requiring that children under the age of 18 be properly restrained in a moving vehicle.

Violations of a provisional operator permit that currently are considered secondary offenses also would be enforced as primary offenses under the bill. These include driving between midnight and 6 a.m. unless returning from a job or school-sponsored activity and having more than one minor passenger in the vehicle when driving without a licensed adult driver.

The risk of experiencing an accident is increased by 23 times if the driver is texting, said Eric Koeppe, president of the National Safety Council of Nebraska. Of the states that have statutes prohibiting texting while driving, he said, Nebraska is one of only four states that enforces it as a secondary offense.

“This is necessary for all drivers, but it’s extremely necessary for our young people so that they start out with good habits,” Koeppe said. “A big part of that is enforcement of the law.”

He said a person may keep a phone within reach while driving but never use it. However, if an officer suspects the driver of having used the device, it would be difficult for the driver to prove otherwise.

“Most people don’t stow their cell phone in a locked glove compartment or the trunk of their car,” he said. “If you’re stopped by law enforcement and they think you were using your phone and can see it sitting on your console, you won’t have any argument in court.”