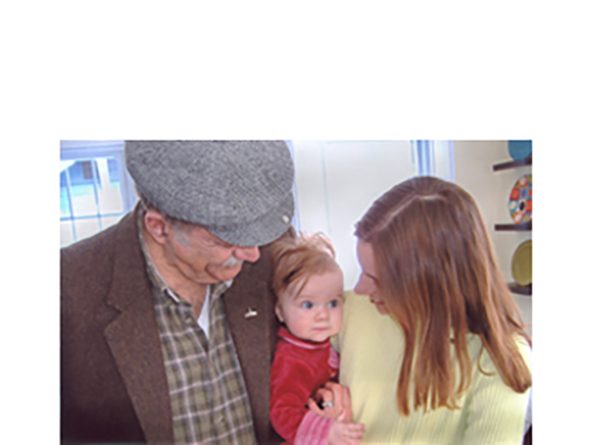 Above: Sen. Wallman enjoys time spent with his granddaughter, Laynie, and daughter, Amy.

He comes from a family that discussed politics regularly, from all angles.

“My uncles were all political, some Republicans, some Democrats. Holidays were always interesting,” he said, recalling that his grandfather would often have to step in to mediate the debate. The young Wallman enjoyed listening and learned a lot from these discussions.

“You always try to pick out the middle ground but sometimes there just isn’t one,” he said.

He said his campaign for office was built on similar discussions held in coffee shops in small towns throughout his district.

Wallman has lived in Cortland his whole life, where he farms with his two brothers. He served on the Norris school board for 16 years, as well as his church, elevator and township boards. He said his father’s service on the local hospital and township boards helped develop his interest in politics.

Wallman also served in the Nebraska National Guard and is a member of the American Legion. He is often asked to serve in the Color Guard at veterans’ funerals.

He and his wife Pat, raised two children: a daughter, Amy, who runs a social services business in Des Moines, Iowa and who, with her husband Jason, has a nine-month-old daughter Laynie; and a son, David, who is in an assisted living facility with a brain injury from a motor vehicle accident.

Wallman said he met his wife on a blind date set up by a friend who thought they’d be a good fit. Pat was a city girl from Clinton, Iowa, he said, but she loved the country and quickly adapted to life as a farm wife and, eventually, his campaign manager.

He said he loves serving as a senator but misses the free time he had to connect with friends at home.

“I used to love to go to town to drink coffee with the boys, but that’s done for now.”

Wallman loves playing cards because it provides a chance to connect with people and learn different ideas. He was a member of a farmer’s group that played cards with other groups from surrounding towns.

“It’s a chance to visit with fellow farmers. We farmers like to talk. It’s because we sit alone in a tractor all day,” he said.

Wallman said he was encouraged to run for office by a mentor, a World War II veteran who recently passed away. Another friend who was also a veteran advised Wallman that if he was elected, he should work to make things fairer for everyone.

“Vets are tremendous individuals to know,” he said. “They want the country to go forward with a little fairness.”

Serving as a state senator provides yet another opportunity for Wallman to participate in discussions like the ones his family engaged in. He said he has enjoyed getting to know the other senators and learning from the veteran senators who have years of legislative experience.

“It’s exciting to be part of it and I love to listen to both sides. I’m proud to know these people. They have different ideas but they’re all good people trying to do the right thing.”