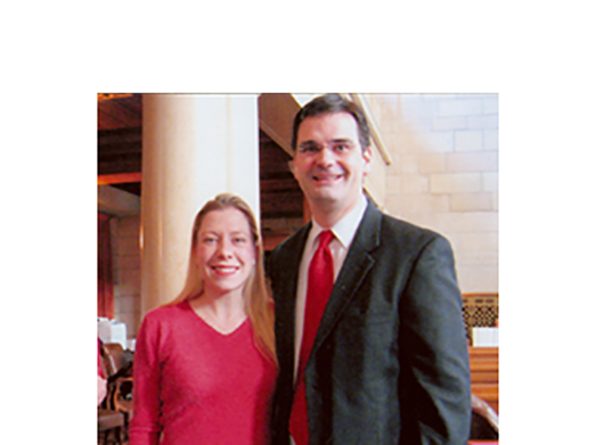 Above: Sen. Pirsch and his wife, Lori, pose for a picture in the Capitol’s Norris Chmber on Pirsch’s first day as state senator.

This wasn’t the first time that Pete Pirsch sat in the Norris Chamber for the swearing in of new senators. He first attended when he was nine years old to see Sen. Carol Pirsch, his mother, take the oath of office in 1979.

He remembers being excited about exploring the Capitol building that day.

“I was just awed and overwhelmed by the grandeur of the building and the hustle and bustle of it,” he remembered.

Growing up with a mom who was also a senator fostered Pirsch’s interest in government, which he studied at the University of Virginia. He went on to work in Washington, D.C. at the White House, on Capitol Hill for a congressman, and as an intern for the U.S. Department of Commerce.

After that, he returned to Omaha to join the family food sales business and attend law school at the University of Nebraska-Lincoln.

Pirsch worked as a criminal prosecutor for the city of Omaha for 10 years and served as a member of the Nebraska Crime Commission from 2003-2007. He later earned a master’s degree in business administration from the University of Nebraska at Omaha.

But until he’d had all those experiences, it hadn’t occurred to him to run for office himself.

“In running a family business and being a criminal prosecutor, you learn that things are not always as they should be,” he said. “You assume those things will be changed, but then a couple years go by and you realize they may not change unless you do something about them.”

Pirsch credits his supportive family, his wife Lori, and his constituents for helping him meet his goal of becoming a state senator.

“I’m very appreciative of people who placed me in this position,” he said. “I can’t believe how nice and supportive they’ve been.”

In his spare time, Pirsch has been active as a volunteer for Boy Scouts, Jaycees, his church and as a Big Brother mentor for 11 years.

He also likes to read and said he has gone through “phases” of swimming, biking and running marathons. All the walking he did throughout his district during his campaign also became an extreme sport.

“I was a lot lighter a few months ago,” he quipped.

Although he grew up in Omaha, Pirsch appreciates the less populated areas of the state that make it unique.

“My mother loved the state so much we would only vacation in Nebraska—Fort Robinson, Niobrara, Wayne Chicken Days, the Burwell Rodeo. I became familiar with the state and saw what wonderful things we had to offer,” he said.