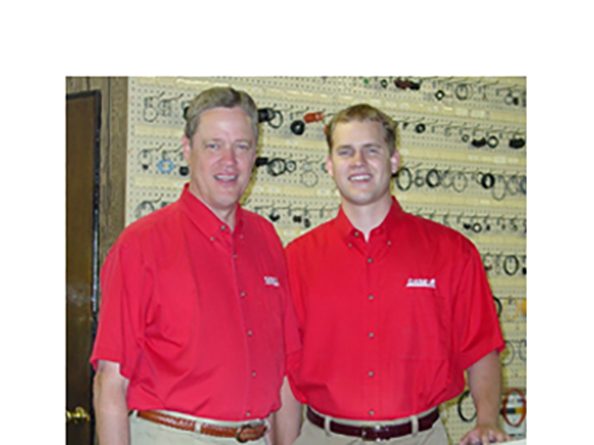 Above: Sen. Dave Pankonin is the owner and manager of a farm equipment business in Louisville started by his great-grandfather. Pankonin’s son Paul, right, is also involved in the business.

Sen. Dave Pankonin can’t talk about himself without mentioning his love for his community and family.

Much of where he is now is a result of where he’s come from, an origin that he references with fondness.

His great-grandfather settled in the Louisville area in the late 18oos and the family has been there ever since.

After establishing a farm equipment business in 1883, Pankonin’s great-grandfather raised his family in Louisville, as did his children and their children after that. Pankonin is now the owner and manager of the business and his son, Paul, is also involved, making it a family business for five generations.

Pankonin said he feels strong ties to the community his family has called home for generations.

“I enjoy the sense of deep-rootedness,” he said. “You know people are committed to the community.”

Pankonin is a graduate of the University of Nebraska–Lincoln College of Business and started a master’s of business program at Northwestern University before returning to Louisville to take over the family business after his father passed away in 1975.

Politics have always been of interest to Pankonin. Like his business sense, he can trace his civic-mindedness back to his family.

Both of his parents were involved in politics. In fact, his mother was the first woman president of the local school board.

“Civic service was not only important to them in theory,” he said. “They participated as well.”

Pankonin spent the summer of 1973 in Washington, D.C., as an intern in the U.S. Senate. The summer was a politically tumultuous one as the investigation of the Watergate scandal continued.

“It was a really good experience,” Pankonin said of his time in D.C.

Since his brief stint in the nation’s capital, Pankonin has held several public offices including memberships on the Louisville Public School Board and the Louisville City Council. Most recently, he was mayor of Louisville.

In addition to civic service and running his family business, Pankonin enjoys spending time reading and being with his family. He and his wife, Lori, just welcomed their first grandchild, Anne, last October. Stephanie, Pankonin’s daughter, lives and works in Spain.

Pankonin said he’s looking forward to his time as a state senator.

“It’s something I’ve always been interested in,” he said. “I just want to do the best job that I can.”