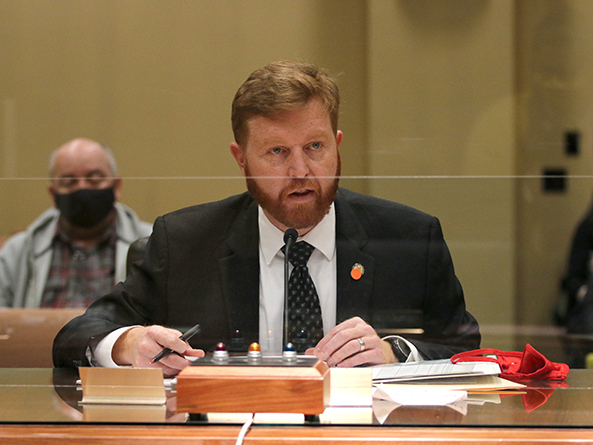 The qualified facility’s net excess generation during a billing period is credited to the customer-generator at a rate equal to the utility’s avoided cost of electricity supply. The credits are carried forward, and any excess credits are paid out at the end of the year.

LB506, introduced by Omaha Sen. John Cavanaugh, would increase that cap to 3 percent.

He said net metering benefits utilities by reducing peak energy demand, allowing them to put off expensive infrastructure projects. The number of net metering customers is growing quickly, Cavanaugh said, and the current cap is too low to meet the demand for solar energy in many parts of the state.

Although some utilities add net metering customers beyond the 1 percent cap — as allowed under the law — some do not, he said.

“The 1 percent cap is set as a floor,” Cavanaugh said, “and many utilities treat it as a ceiling.”

John Hansen, president of the Nebraska Farmers Union, testified in support of the bill. He said some rural electric associations near the 1 percent cap refuse to approve net metering projects, despite demand from some of their customers.

Because each utility’s system is different, Dockhorn said, utilities should be allowed to determine the amount of net metering they accept.

“We believe that renewable distributed generation is good to have in our systems,” he said. “However, we also believe that the amount of that generation should be left up to our local utilities.”

Dockhorn said net metering was meant to encourage the adoption of renewable energy. Now that renewable energy costs have dropped, he said, it is not necessary to expand net metering capacity and further shift the cost of maintaining the electrical grid to customers who do not generate their own electricity.

Under LB573, introduced by Lincoln Sen. Eliot Bostar, a facility would qualify for net metering if it has a rated capacity at or below 25 kilowatts as measured in alternating current.

Bostar said the law does not specify which type of current utilities must use when determining whether a customer-generator’s facility qualifies for net metering. Most utilities use a system’s alternating capacity, he said, but some use its direct current capacity.

Bostar said this puts solar arrays at a disadvantage to wind turbines because solar panels generate electricity in direct current, which must be converted to the alternating current accepted by the electrical grid.

“Energy loss occurs during inversion,” he said, “making the distinction between measuring in direct current before that transition or alternating current after the energy inversion meaningful to our customer generators.”

Robert Best testified in support of LB573. He said Norris Public Power District determined that part of his solar array does not qualify for net metering because the system’s direct current capacity exceeds the 25 kW maximum, although its output in alternating current is less than 23 kW.

“I am so set on trying to get this resolved because what they’re doing is incorrect,” he said. “Other power districts are using alternating current, but Norris isn’t.”

Shelley Sahling-Zart testified in support of LB573 on behalf of Lincoln Electric System, the League of Nebraska Municipalities, NMPP Energy and the Nebraska Public Power District. She said the current law is ambiguous and should be clarified.

Sahling-Zart said most electric utilities approve net metering projects based on their alternating current capacity because that is the type of current accepted by the electrical grid.

“If we were connecting a customer-owned wind system or methane or something else, that would be on alternating current,” she said. “So from our standpoint, that makes it more consistent.”

Jerry Enns testified in opposition to the bill on behalf of Norris Public Power District and the Nebraska Rural Electric Association. He said net metering is intended to meet or offset customers’ electricity generation requirements.

Of the power district’s approximately 100 net metering customers, Enns said, only one has claimed that using a system’s direct current rating to determine whether it qualifies for net metering is unfair. He said Norris delivered 11,000 kilowatt-hours of energy to that customer in 2020 and received nearly 33,000 kWh.

“Allowing a solar array’s DC capacity to exceed 25 kW and still fall within net metering limitations allows the opportunity to circumvent the spirit of [the law] by overproducing and further burdening the other ratepayers,” Enns said.