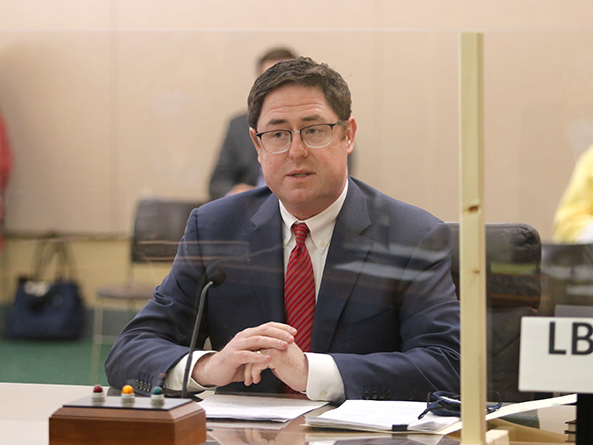 The Judiciary Committee heard testimony Feb. 10 on a bill meant to create fiscal transparency in the criminal sentencing process.

LB335, sponsored by Norfolk Sen. Michael Flood, would require the court to announce the total estimated cost of imprisonment in open court when sentencing a defendant. For example, if the state is spending $200,000 to incarcerate someone for five years, Flood said, the public should understand those costs and have input into possible alternatives.

“This bill is intended to provide a fiscal note of sorts so that the general public and all Nebraskans can have the opportunity to think about whether the offender’s conduct warrants the amount of money required to incarcerate him or her,” he said.

The bill would require the state Department of Correctional Services to calculate the average cost of imprisonment for inmates for the preceding year and submit such data to the Nebraska Commission on Law Enforcement and Criminal Justice annually beginning Aug. 1, 2022.

The data would be forwarded by the commission to the state court administrator, who then would be required to distribute the data to all county and district courts by Sept. 15 each year.

Spike Eickholt, representing the ACLU of Nebraska, spoke in support of LB335. A person found guilty of forging $5,000 worth of checks should face consequences, he said, but incarceration may not make fiscal sense.

“People are willing to pay for locking up the really bad people,” Eickholt said. “[However], I think the public might be somewhat more understanding that it might not make sense to lock up somebody like that for $41,000 a year.”

Opposing the bill was Tim Hruza, speaking on behalf of the Nebraska State Bar Association. The cost of incarceration is important information, he said, but should not impact the administration of justice.

“We have some concerns about giving a judge pause in applying the appropriate sentence to those facts [of a case] … and pointing citizens to the judge as the person who is in best control of that [cost],” Hruza said.

The committee took no immediate action on LB335.