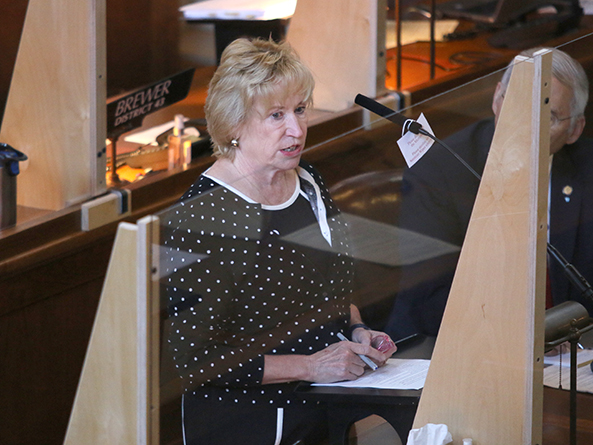 A bill combining several major tax proposals advanced to the final round of debate Aug. 11 after a successful cloture motion.

LB1107, introduced by Norfolk Sen. Jim Scheer, would create a new business tax incentive program, the ImagiNE Nebraska Act. It also would require the state to provide matching funds for a potential academic hospital and all-hazards disaster response facility at the University of Nebraska Medical Center.

A third major component of the bill is a refundable income tax credit that would be based on the amount an eligible taxpayer paid in property taxes to their school district during the previous year.

For calendar year 2020, the total amount of credits would be $125 million. For the following three years, that amount could increase based on growth in the state’s net tax receipts and the level of its cash reserve.

Elkhorn Sen. Lou Ann Linehan filed an amendment on select file that she said would make several technical and substantive changes to the proposal.

Linehan said the amendment clarifies that any funds appropriated to the new refundable income tax credit would be based on growth in actual tax receipts compared to the prior fiscal year, not estimated growth. The amendment also would prohibit the allowable growth percentage from exceeding 5 percent in any one year.

Another change would ensure that the state’s cash reserve could not drop below $500 million after any transfer of funds to the new program, Linehan said.

The amendment would appropriate approximately $1.26 million from the general fund for fiscal year 2020-21 and $456,000 for FY2021-22 to the state Department of Revenue to carry out the bill’s provisions.

It also would appropriate approximately $1.15 million from the general fund for FY2020-21 and $1.88 million for FY2021-22 to the state Department of Economic Development for the same purpose.

After 90 minutes of debate on select file, Scheer offered a motion to invoke cloture, which ceases debate and forces a vote on a bill. The motion succeeded on a vote of 42-4. Thirty-three votes were needed.

Senators then adopted Linehan’s amendment on a vote of 41-3 and voted 41-4 to advance the bill to final reading.