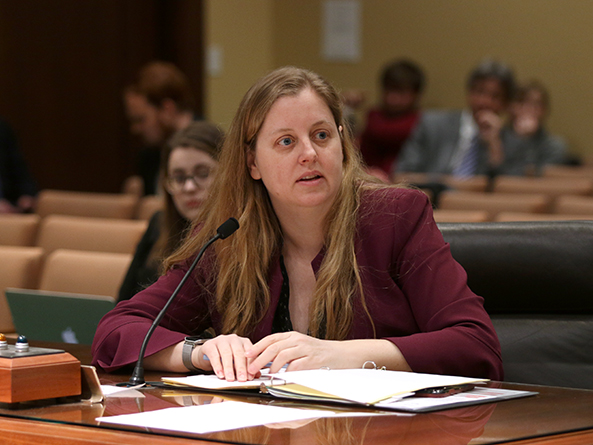 The Education Committee heard testimony Feb. 24 on a bill that would pay schools up front for large, unexpected increases in special education costs.

Under LB1023, introduced by Bennington Sen. Wendy DeBoer, school districts could apply to the state Department of Education for a payment to cover an extraordinary increase in special education costs.

The bill states legislative intent to appropriate $3 million for fiscal year 2020-21 to a new fund from which the department would make the payments to school districts.

DeBoer said the state currently reimburses schools for 45 to 50 percent of their special education costs. Because those payments are made in arrears, however, it can be difficult for districts to respond to unexpected cost increases after they have set their budgets, she said.

DeBoer said LB1023 particularly would benefit small, rural districts, where the enrollment of only one or two students identified as having special needs can have a disproportionate effect on the budget.

Jack Moles testified in support of the bill on behalf of the Nebraska Rural Community Schools Association and the Nebraska Council of School Administrators. In a recent informal poll of member districts, he said, 30 of 48 respondents had enrolled at least one special needs student within the past two years, causing a substantial increase in those districts’ special education costs.

Moles said rural districts often have to start a special education program from scratch when a special needs student enrolls, unlike larger districts that can benefit from economies of scale. Rural districts also have higher transportation costs, he said.

Suzanne Sapp testified in support of LB1023 on behalf of the Ashland-Greenwood Public Schools board and the Nebraska Association of School Boards. Helping schools pay for unusual increases in special education expenses would ensure that they do not have to cut programs that serve the rest of the student population, she said.

In recent years, Sapp said, Ashland Greenwood paid $7,000 per year for a vision specialist, as well as $30,000 for special equipment, to ensure that a student with a degenerative eye disease could continue her education. It also paid approximately $100,000—in addition to transportation and staff costs—to send four students to a Boys Town day school program.

“LB1023 provides an avenue of funding which is much needed by schools who, like us, can’t possibly plan for what we may encounter after [our] budgets have been set,” she said.