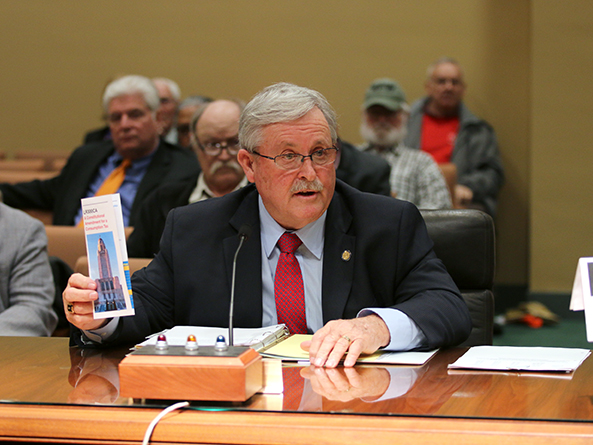 The Revenue Committee heard testimony Feb. 12 on a proposed constitutional amendment that would repeal state and local taxes and require the Legislature to enact a consumption tax on goods and services.

LR300CA, introduced by Sen. Steve Erdman of Bayard, would prohibit the state and all its political subdivisions from imposing any form of taxation other than a single-rate consumption tax and require the Legislature to enact such a tax by Jan. 1, 2022.

If passed, the resolution would place the question on the November 2020 general election ballot.

“If we pass this … we will become the most [envied] state in the nation,” Erdman said. “This is an opportunity for us to be different.”

Erdman said the tax would generate the same amount of revenue as current taxes. It would be paid by the first purchaser of any new good at the time of sale and on any service, he said, and businesses would collect and remit the tax to the state.

The proposed amendment also would prohibit the Legislature from granting any exemptions to the tax.

Erdman brought an amendment to the hearing that he said would leave the state’s excise tax on gasoline in place and allow local governments, such as counties and cities, to impose their own consumption tax with voter approval.

Erdman said the amendment also would provide for “prebate” payments intended to offset the tax for low-income Nebraskans.

Duane Lienemann of Blue Hill testified in support of the proposal, saying the state’s current tax system is “unequal and unfair.” He said Nebraska relies too heavily on property taxes to fund local governments, placing a heavy burden on farmers, ranchers and businesses.

“I feel that the property tax issue has reached such a level that any more failed promises of significant property tax relief by the state Legislature will further discredit this unicameral body in the eyes of the public,” Lienemann said. “Big steps are needed.”

George Davis, owner of Ollie the Trolley in Omaha, also testified in support. He said the proposal is a “viable alternative” to current state taxes and that it could reduce the amount of taxes his business pays for inputs such as mechanical parts, fuel and computers.

“[The] charges could be more transparent and more understandable to me in tracking its costs and its impact upon my business daily,” Davis said.

Malia Shirley of Omaha also testified in support of the resolution. As a recent college graduate, Shirley said, she is trying to decide where to start a career and a family. Young people like her want to buy homes, she said, but many decide to move to other Midwestern states with lower property taxes.

“We want to contribute to our communities and the society around us, and we want to continue making our lives here in Nebraska,” Shirley said. “The current property taxes discourage me and my young professional peers from making Nebraska a permanent home.”

Testifying in opposition to the proposal was Tiffany Friesen Milone, policy director at OpenSky Policy Institute. She said a 2005 report by a presidential advisory panel rejected a federal consumption tax similar to the one proposed by LR300CA because of its regressivity and the high rate needed to achieve revenue neutrality.

Additionally, Friesen Milone said, even if the proposed prebate were to fully offset the tax for households with the lowest incomes, the tax then would fall heaviest on middle-income households.

“Because the wealthy are unlikely to spend so much that they’d pay as much in sales tax as they had been paying in income taxes,” she said, “only those in the middle would be left to make up the difference.”

Under the proposal, Friesen Milone said, the state would tax goods and services that it previously has exempted for good policy reasons, such as groceries, health care, child care and private school tuition.

John Hansen, president of the Nebraska Farmers Union, also testified in opposition. He said the proposal as introduced would require local governments “to get down on bended knee” and hope that the Legislature meets their budget requests.

“This approach … takes away anything that remotely looks like a backup plan or a backdoor to be able to make up for shortfalls,” Hansen said.