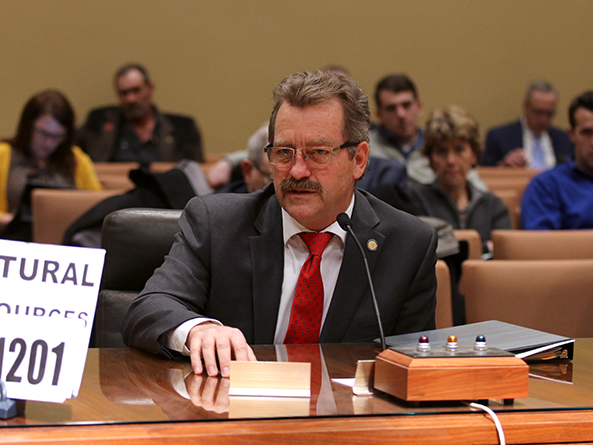 A task force would create a comprehensive, statewide flood mitigation plan under a proposal heard Feb. 5 by the Natural Resources Committee.

Sen. Bruce Bostelman of Brainard, sponsor of LB1201, said Nebraska lacks a coordinated strategy to reduce flood risk. In light of last year’s flooding and the prospect of major future floods, he said, it is time to coordinate state and local flood mitigation planning.

Bostelman said an integrated plan would help various stakeholders, including the Nebraska Emergency Management Agency, natural resources districts, counties, cities and others, to prioritize flood mitigation projects and secure federal funding to pay for those projects.

“With all resources on the table,” he said, “the chances of finding federal or private funding to create a plan are greater, meaning less cost to the state and a stronger plan to mitigate flood risk.”

Among other duties, the Flood Mitigation and Planning Task Force would determine how Nebraska ranks in eligibility for federal funds and examine current federal program requirements to enhance state and local hazard mitigation plans.

It would create an inventory of flood planning and mitigation programs and support the assessment, restoration and revitalization of roads, dams, levees and other infrastructure that is “continually devastated by flood events to ensure resilience from future floods.”

The task force also would develop strategies to minimize disruption to business activities and to support the restoration and revitalization of agricultural systems after a flood.

It also would identify housing supports for flood-affected communities and strategies for moving vulnerable populations out of high-risk areas.

Additionally, it would evaluate the state’s current floodplain management program and determine if additional changes to state law are necessary to improve collaboration and coordination between state and local entities.

The task force would be housed within NEMA and the agency’s adjutant general would serve as chairperson.

Task force members would include a representative from a natural resources district as well as the directors of the state departments of Natural Resources, Transportation, Agriculture and Environment and Energy.

It also would include the chairperson of the Natural Resources Committee and an at-large member of the Legislature appointed by the Executive Board, both of whom would be non-voting.

The task force could convene advisory groups composed of representatives from stakeholders including cities, counties and natural resources districts.

Jeff Henson, a senior mitigation planner and business development director at JEO Consulting, testified in support of the bill on behalf of the American Council of Engineering Companies of Nebraska. He said trends suggest that major floods are occurring more frequently in Nebraska and that the proposed planning would help reduce flood risks.

Henson said a 2018 National Institute of Building Sciences study found that flood mitigation projects save an average of $6 in damages for every $1 spent on construction. Ensuring that local and regional hazard mitigation plans are as detailed as possible would help the state compete for federal funding aimed at reducing flood-related vulnerabilities, he said.

“Mitigation works, but standalone efforts are not sufficient,” Henson said. “We need stronger planning at the state level to set a course for what actions will be needed and identify resources available to get the job done.”

John Winkler, general manager of the Papio-Missouri River Natural Resources District, testified in support of LB1201 on behalf of the Nebraska Association of Resources Districts. He said the state can better plan and prepare for the next disaster, as well as expedite mitigation efforts to prevent damages from floods like last year’s.

“Unless we properly plan to take decisive action and mitigate flooding,” Winkler said, “we will be doomed to repeat this scenario over and over again into the foreseeable future.”

Katie Torpy testified in support of the bill on behalf of the Nature Conservancy, saying that preparing for major flood events is increasingly urgent as climate change makes them more frequent.

Beth Bazyn Ferrell provided neutral testimony on behalf of the Nebraska Association of County Officials. Although LB1201 would include counties in a list of stakeholders that could advise the task force, Bazyn Ferrell suggested that the committee consider adding a county board member, highway supervisor or emergency manager to the task force itself.