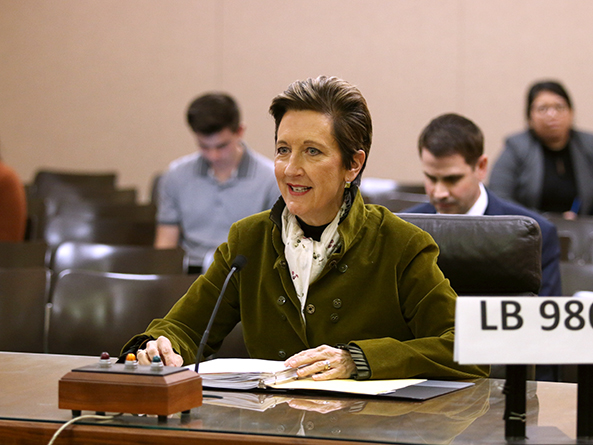 Criminal history would not disqualify a person automatically from public postsecondary school admission under a bill heard by the Judiciary Committee Jan. 30.

LB986, sponsored by Lincoln Sen. Patty Pansing Brooks, would prohibit any publicly funded college or university from inquiring about a person’s criminal or juvenile court history when considering his or her application for admission, except as otherwise required by federal or state law.

The national unemployment rate among the formerly incarcerated is 27 percent, Pansing Brooks said, adding that the ability to obtain training and education is central to securing employment.

“We need to ensure opportunities are available for [formerly incarcerated people] to get the education they need to contribute to our workforce,” she said.

Juliet Summers, representing Voices for Children in Nebraska, supported the bill. She said it would offer young adults the ability to confidently approach the college application process without worrying about their past.

“Individuals—including youth—who have paid their debt to society should have the chance to advance in a chosen career field, pursue intellectual or creative passions, build positive peer and mentor relationships, and earn an honest living,” Summers said. “Moreover, when they are able to do so, their prospects for lifetime income and stability improve, impacting the prosperity of neighborhoods, communities and our state as a whole.”

Also supporting the bill was Rose Godinez, representing ACLU of Nebraska. Nationally, one in three adults has a criminal record, she said, and the state Department of Corrections estimates that over 2,000 people with felony convictions are released into Nebraska communities every year.

“Public safety is vitally important for students, families and schools,” Godinez said. “However, there has been no conclusive research finding to suggest using a criminal justice [background check] in any way lowers campus crime.”