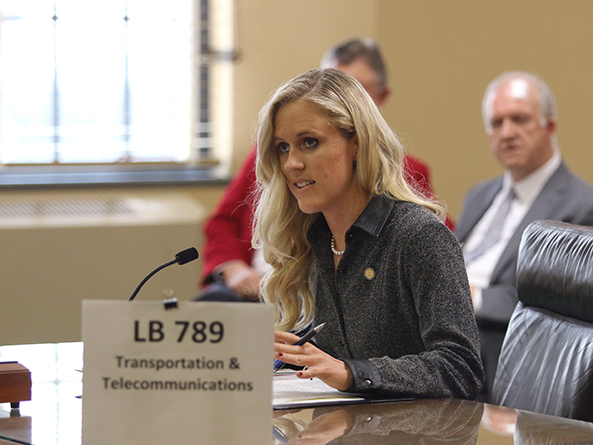 Drivers who fail to stop for school buses would be subject to increased enforcement under a bill heard by the Transportation and Telecommunications Committee Jan. 28.

Under LB789, introduced by Peru Sen. Julie Slama, a school bus operator could report a driver who fails to stop when the school bus stop arm is extended. Currently, bus drivers can report violators to law enforcement, Slama said, but law enforcement will not issue a citation unless they personally witness the infraction.

“There are children who are getting hit by cars and dying because a driver can’t be bothered to look up from their phone before passing a school bus,” she said. “When we have a problem that is so concerning that some cities and towns are [stationing] police officers on their buses to monitor traffic, something needs to be done.”

Any report filed by a school bus driver—and submitted to his or her employer—must include the time and approximate location of the violation, the license plate number and the color and type of vehicle involved.

Within 72 hours of receiving the report, the employer would be required to forward it to law enforcement, who would have seven calendar days to initiate an investigation of the alleged violation.

If law enforcement is able to identify the driver and has reasonable cause to believe a violation occurred, the person would receive a uniform traffic citation. If the driver at the time of violation cannot be confirmed, the owner of the vehicle would be liable for the violation.

“Currently it is difficult to follow up violations of the stop arm,” Moles said. “This bill would help and at least provide another opportunity to solve that problem.”

Cheri Wirthele, board president of Educational Service Unit 4, also supported the bill. Stop arm violations do not just happen on highways, she said, but inside city limits and on country roads as well.

“When a driver chooses to pass my bus and the red stop arm is out and the lights are flashing, he or she puts the students inside and outside of my bus in danger,” Wirthele said, adding that the bill would bring new awareness to drivers’ responsibilities when it comes to interacting with school buses.

No one testified in opposition to LB789 and the committee took no immediate action on it.