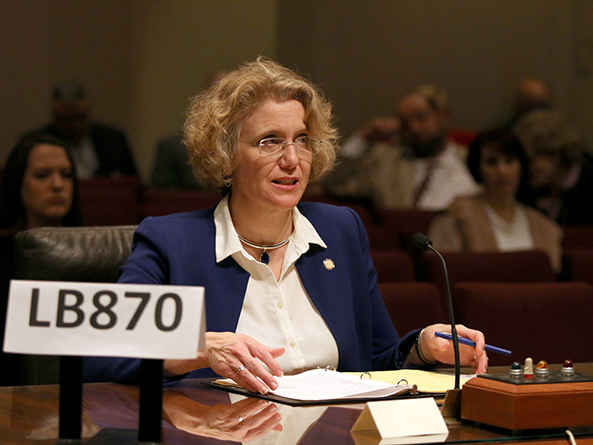 A bill considered Jan. 28 by the Urban Affairs Committee would allow cities and villages to borrow money after a calamity.

LB870, introduced by Bellevue Sen. Sue Crawford, would allow cities and villages to borrow directly from a financial institution only to repair or rebuild property or restore public services damaged or disrupted by a natural disaster.

The bill also would waive borrowing limits currently placed on cities and villages if funds are used to recover from a disaster.

Crawford said she introduced the bill in response to last spring’s flooding that devastated numerous communities, including Peru. Floodwater contaminated Peru’s drinking water supply, she said, and although a local bank was willing to help finance the transportation of clean water, state law prevented it from doing so.

“LB870 is designed to address the emergency need for financing,” Crawford said.

Robert Hallstrom, speaking on behalf of the Nebraska Bankers Association, testified in support of the bill. He said cities and villages often use direct borrowing to finance vehicles or other smaller expenses, and allowing direct borrowing after a natural disaster would be beneficial because of the emergency nature of the need.

Lynn Rex of the League of Nebraska Municipalities also spoke in support of the bill. She said LB870 would be limited enough to prevent cities and villages from direct borrowing to pay for non-emergency expenses.

“Given what has happened since last March, this is really important,” Rex said.