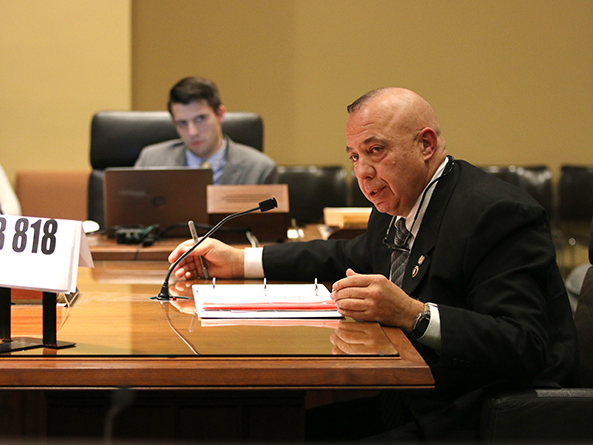 The tax on owners of renewable energy generation facilities would be indexed to inflation under a proposal heard Jan. 24 by the Revenue Committee.

Current law requires the owner of an energy generation facility that uses wind, solar, biomass or landfill gas as a fuel source to pay a tax of $3,518 per megawatt of nameplate capacity, a facility’s intended full-load output.

Under LB818, introduced by Gordon Sen. Tom Brewer, the state Department of Revenue would, each year beginning Jan. 1, 2021, adjust the nameplate capacity tax by the percentage change in the Consumer Price Index for All Urban Consumers for the 12-month period ending in August of the previous calendar year.

Brewer said the Legislature created the nameplate capacity tax to replace the property taxes wind turbine owners otherwise would have paid, a method he supports. However, he said, the tax should be recalculated over time to reflect inflation.

“The tax that wind energy pays instead of property tax cannot remain chiseled in stone for eternity while everyone else’s taxes continue to increase,” Brewer said. “It’s not fair.”

According to the Legislative Fiscal Analyst, assuming that total nameplate capacity in 2020 is similar to that in 2019, counties would receive approximately $87,000 in additional tax revenue this year if LB818 had been in effect.

Jon Cannon, deputy director of the Nebraska Association of County Officials, testified in support of the bill. He said that the Legislature, when it created the nameplate capacity tax in 2009, failed to account for the fact that original equipment costs and taxes would increase over time.

David Levy testified in opposition to the bill on behalf of BHE Renewables and Kimball Wind. He said the nameplate capacity tax is intended to replace the personal property tax that would have been assessed on equipment such as wind turbines, not the real property tax assessed on buildings or other improvements.

That is because wind turbines, like other types of personal property, depreciate over time, Levy said. LB818 would take an “apples and oranges” approach by applying an inflationary factor to a tax on depreciating equipment, he said.

Also in opposition was John Hansen, president of the Nebraska Farmers Union. He said the nameplate capacity tax is a “good, creative solution” that benefits both wind energy developers and rural communities. Any adjustment would affect power purchase agreements already in place, Hansen said.

“I have a real issue with changing the rules of the game after the contract’s already in place,” he said.

Lucas Nelson, policy associate at the Center for Rural Affairs, also testified in opposition. He said the wind energy industry has had broad economic benefits for rural Nebraska, including new jobs, payments to landowners and property and nameplate capacity tax revenue. Changing the nameplate capacity tax would create uncertainty for developers, Nelson said.

“Any sort of barrier or hurdle can harm potential new development and chip away at that revenue over time,” he said.