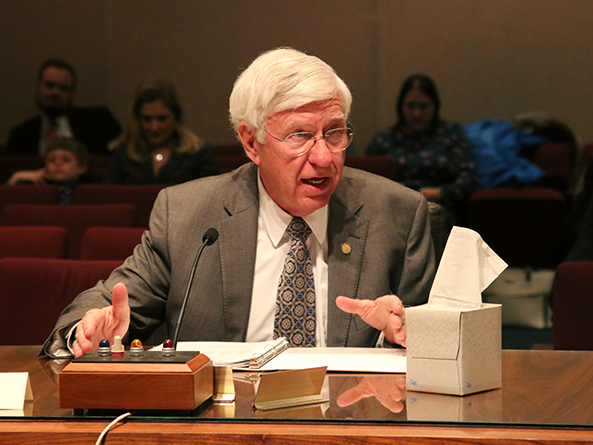 Newborns in Nebraska would be screened for Spinal Muscular Atrophy under a bill discussed Jan. 22 by the Health and Human Services Committee.

LB825, introduced by Omaha Sen. Robert Hilkemann, would add SMA to the list of 32 required screenings for all infants born in Nebraska.

“This is a bill that will save lives,” Hilkemann said. “How often can we say that?”

The additional test would add $5.50 to the current $80.50 cost of the mandatory screening, he said.

Dr. Geetanjali Rathore of Children’s Hospital and Medical Center in Omaha spoke in favor of the bill.

SMA is the leading genetic cause of death for newborns, Rathore said. Undiagnosed children slowly will become completely paralyzed, lose the ability to eat and likely die in less than two years, she said.

“Until recently, we were not able to give any hope to these parents but now we have life-saving therapy and a potential cure for SMA,” Rathore said.

Approximately two children born in Nebraska each year will have the disease, she said, and without early detection, irreversible nerve damage will occur quickly.

Also testifying in support was Chris Arnold, whose son, Wyatt, was born with SMA in 2010. The Arnolds initially were unable to understand why Wyatt struggled to roll over or move his arms until they received a diagnosis. He lived only five months.

No one testified in opposition and the committee took no immediate action on LB825.