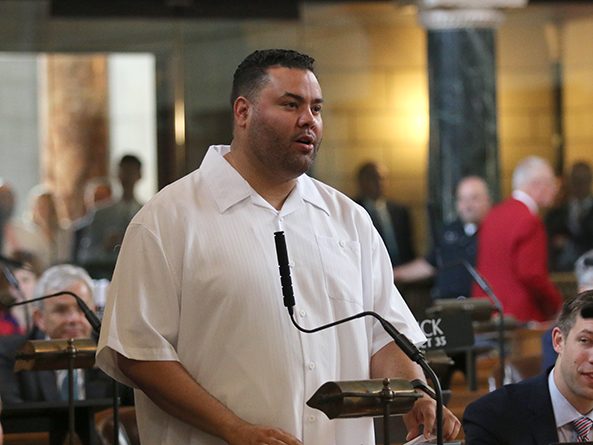 Lawmakers successfully overrode a veto May 31 of a bill that adopts the Regional Metropolitan Transit Authority Act.

An ordinance to create, join or leave a RMTA will require a two-thirds vote of the governing authority of each municipality involved. If a RMTA is created, it will be governed by a seven-person board and have the power to issue revenue bonds.

He added that residents in neighboring Sarpy County could see their property taxes increased if a RMTA were created.

Wayne filed a motion to override the veto, saying public transportation is essential to economic growth. Property taxes would not increase, he said, because a RMTA’s taxing authority would be subject to an elected oversight board.

“In order for Omaha to move forward, we need this,” Wayne said. “Public transit is the lifeline of every community.”

Sen. Tony Vargas of Omaha supported the veto override motion. He said that residents in his South Omaha district have lower labor participation rates because they do not have access to reliable transportation.

“I need people in my community to get back to work and have opportunities,” Vargas said. “If you don’t think regional transit and public transit aids with that, then I implore you to come down to my district.”

Also supporting the override motion was Norfolk Sen. Jim Scheer. He said city leaders in the Omaha metro area should be allowed to determine whether joining a RMTA would benefit their communities.

“This bill is permissive,” Scheer said. “It’s not a tax increase. We’re allowing local entities to determine if they want to participate.”

Sen. Mike Groene of North Platte opposed the motion to override. Omaha needs expanded mass transit, he said, but he could not support creating another entity with the power to raise taxes.

“We have too many elected boards in this state,” Groene said. “This is a huge, huge increase in government.”

Also opposing the motion was Sen. Tom Briese of Albion. He said local political subdivisions in Nebraska are too dependent upon property taxes to fund programs and projects.

“Find me a different funding solution for what we’re trying to do here and I’m all in,” Briese said.