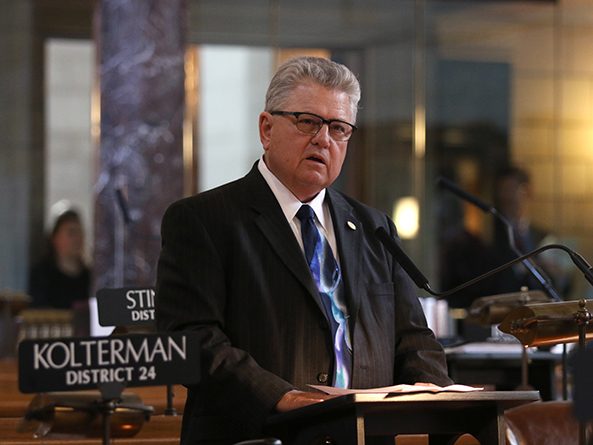 Lawmakers debated a bill May 15 that would create a new business tax incentive program to replace the Nebraska Advantage Act. The application period for that program is set to end next year.

Sen. Mark Kolterman of Seward, sponsor of LB720, said the new program, called the ImagiNE Nebraska Act, would be simpler and more transparent than the Nebraska Advantage Act, focus on high-wage jobs and improve the state’s ability to attract new business investment.

“The overall tax burden in Nebraska is too high for citizens, and the need to grow our state has never been more important,” he said. “In order to find resources to provide this tax relief, we need a competitive business climate that helps grow and strengthen Nebraska’s economy with new jobs and new investment.”

A pending Revenue Committee amendment, which includes provisions that Kolterman said are meant to address concerns about the original proposal, would replace the bill.

Under the new program, businesses would apply to the state Department of Economic Development and enter into an agreement with the department if they meet the program’s requirements.

Qualifying businesses would receive a varying combination of incentives—wage credits, income tax credits, sales and use tax refunds and exemptions, personal property tax exemptions or real property tax refunds—based on their level of capital investment and the number of employees they hire at a minimum qualifying wage.

Agriculture, mining, construction, utilities and public administration would not qualify for incentives.

Under the amendment, Kolterman said, businesses would be required to offer health insurance to each new employee.

Kolterman said the ImagiNE Nebraska Act would reduce state revenue by an average of approximately $106 million per year over 10 years.

Lincoln Sen. Kate Bolz introduced an amendment that would include provisions of her LB527, which would create a program to provide job training grants to employers. Bolz said any discussion of business tax incentives should include workforce development because a lack of skilled workers is holding back the state’s economic growth.

Bolz also introduced an amendment that she said would cap the proposed incentives to avoid the volatile jumps in lost revenue caused by the state’s current tax incentive programs.

“I agree that we need a tax incentive program,” she said. “But I think—just like any other aspect of our budget—we should establish a priority and a parameter for what that investment looks like.”

Sen. Matt Williams of Gothenburg supported the committee amendment. He said the Legislature should not wait until next year to replace the Nebraska Advantage Act because the potential loss of tax incentives could deter companies from locating here.

“If there’s anything that businesses want, it is certainty,” Williams said.

Omaha Sen. John McCollister also supported LB720, saying Nebraska is engaged in an “incentive arms race” with other states. He said the proposal’s projected cost due to lost revenue does not account for the economic benefits of new jobs.

McCollister said a mechanism he proposed to help control the program’s cost is included in the committee amendment. It would require the speaker of the Legislature, the chairpersons of the Appropriations, Revenue and Legislative Performance Audit committees and the state tax commissioner to meet each fall to review the most recently available data on the program.

Sen. Sue Crawford of Bellevue also supported the proposal. The committee amendment would allow businesses to use incentives they earn to repay job training loans, she said, and it would make tax incentives’ impact on sales and use tax collections clearer to cities and counties than it is under the Nebraska Advantage Act.

Crawford said capping incentives as Bolz proposed would be difficult because the amount a business receives depends on its performance and is not set in advance. However, the required annual review of program data would make it easier for the Legislature to adjust the program’s cost, something senators have been reluctant to do with the Nebraska Advantage Act, she said.

“We’re going to have to have a different culture with [LB]720—that it’s acceptable and appropriate to change it year to year,” Crawford said.

Albion Sen. Tom Briese said he would not support the proposal unless the Legislature also passes “substantial and significant” property tax relief this session.

Sen. Mike Groene of North Platte questioned why the Legislature would approve a new business tax incentive program before addressing high property taxes. He said the Nebraska Advantage Act mainly has helped Lincoln and Omaha, not the state’s rural areas, where low commodity prices, population loss and property taxes are the main concerns.

Sen. Curt Friesen of Henderson opposed the bill. He said the state has forgone approximately $1.5 billion in revenue under existing tax incentive programs without seeing a commensurate increase in economic growth.

Friesen supported the Bolz amendment, saying the state should focus on job training rather than job creation.

“Our unemployment is the lowest it’s been in years,” he said. “For some reason, we want to incentivize the creation of new jobs.”

After three hours of debate, the Legislature recessed before voting on the committee amendment, the Bolz amendment or LB720. Per a practice implemented by Speaker Jim Scheer, the sponsor of a bill that is facing a potential filibuster must demonstrate sufficient support for a cloture motion before the measure will be scheduled for additional debate.