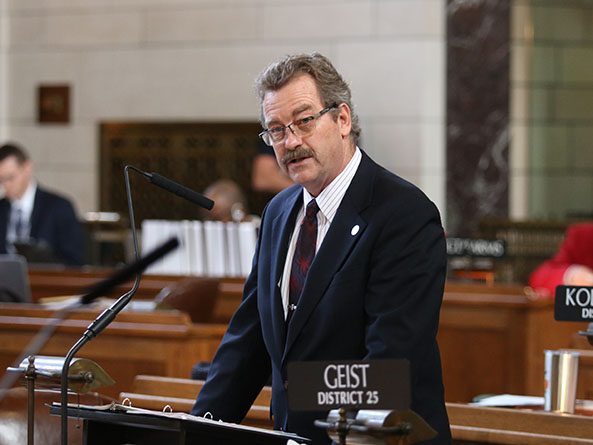 A bill that would require owners to remove a wind turbine’s concrete foundation after decommissioning stalled on first-round debate April 23.

Introduced by Brainard Sen. Bruce Bostelman, LB700 would make any person who owns, operates or manages a wind energy conversion system responsible for decommissioning or reclamation costs necessary for removal of the system.

A pending Natural Resources Committee amendment would replace the bill. It would require a wind turbine owner who is a party to a wind agreement to provide every landowner who also is a party to that agreement with information about the materials and equipment that will be removed from, and that will remain on, the landowner’s property when a wind turbine is decommissioned.

The amendment would require every wind agreement executed on or after Jan. 1, 2020, to provide for the removal of a wind turbine’s foundation material and equipment—which the bill defines as anchor bolts, rebar, conduits and concrete—below grade upon decommissioning. The requirement would not apply to a wind turbine that is used for repowering within 24 months after it would have been decommissioned.

Any void left from the removal of foundation material and equipment would be restored to the condition of the land prior to the installation of the turbine or to an improved condition.

Bostelman said state law requires wind energy companies to create a plan for decommissioning wind turbines when they reach the end of their useful lives, but the law does not specify what those plans must include.

He said companies generally leave most of a turbine’s concrete foundation in the ground, which he said could affect soil health and the future land use. Wind turbine owners, not landowners, should be held responsible for removing that material, Bostelman said.

“We want to make sure that the land is returned to a natural state so the [landowner] can utilize that land in the future,” he said.

Sen. Robert Clements of Elmwood supported the bill, saying the cost of removing the entire concrete foundation is only 3 percent of the revenue that a wind turbine generates during its useful life.

“This is a very small … requirement in this bill that’s not going to harm wind energy at all and is definitely going to help the environment,” he said.

Hastings Sen. Steve Halloran also supported LB700, saying its provisions are a “worthwhile precaution.” He said companies that generate renewable energy logically should support a requirement that they leave the land in as good or better condition than they found it when decommissioning a wind turbine.

Sen. John McCollister of Omaha opposed the bill, saying the proposed requirement to remove the entire foundation is “burdensome and unrealistic.” He said the requirement would increase the cost of decommissioning a turbine by 25 to 35 percent.

Bellevue Sen. Carol Blood also opposed LB700, saying it would restrict the right of landowners to negotiate contracts with wind energy companies as they see fit.

She said the bill also would single out the wind energy industry by not applying the same requirements to other businesses and utilities that place concrete and steel in the ground. The EPA does not consider either material to be hazardous, Blood said.

“This is not good policy that benefits all of Nebraska,” she said. “I believe this is policy that … picks on a particular industry.”

Sen. Matt Williams of Gothenburg also opposed the bill. He said wind energy development has benefited Nebraska by generating property tax revenue for counties and lease payments for landowners. Although protecting the state’s land and environment is important, he said, the bill would create barriers to growing the wind energy industry in Nebraska.

“I believe LB700 goes beyond what is reasonable,” he said, “and I would argue that removal of this [material] clear to the base could cause more damage than it would be worth.”

The Legislature moved to the next item on its agenda before voting on the committee amendment or LB700. Per a practice implemented by Speaker Jim Scheer, the sponsor of a bill that is facing a potential filibuster must demonstrate sufficient support for a cloture motion before the measure will be scheduled for additional debate.