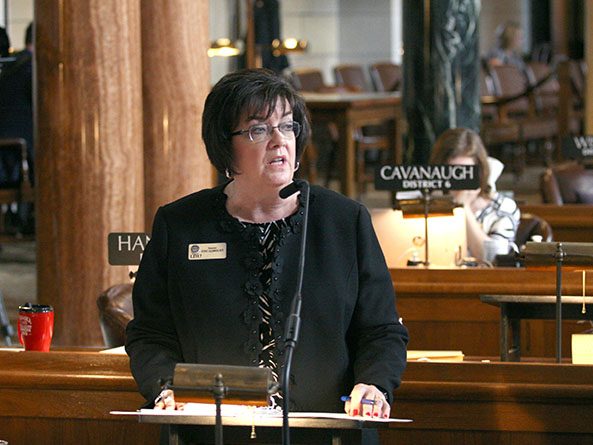 A bill intended to simplify the administration of the Volunteer Emergency Responders Incentive Act was advanced from general file April 8.

The act provides a $250 refundable income tax credit for qualifying volunteers serving a county, city, village or rural or suburban fire protection district. A certification administrator at each volunteer department keeps a record of points awarded to members based on their activities. Members qualify for the credit if they accumulate enough points.

Sen. Joni Albrecht of Thurston, sponsor of LB222, said the bill would streamline the act’s administration.

“LB222 will hopefully remove any unintended burdens caused by the original [act] and continue to encourage and reward our hardworking volunteer emergency responders,” she said.

The bill would require the certification administrator to provide each volunteer member with notice of the total points he or she has accumulated during the first six months of the current calendar year no later than July 15 of each year.

It also would require the administrator to provide each volunteer member a written certification stating the total number of points accumulated by the member during the immediately preceding year and whether that member qualified as an active emergency responder, active rescue squad member or active volunteer firefighter for the year. The notification could be sent no later than Feb. 1 of each year.

LB222 would clarify that a volunteer member would claim the credit by including a copy of the certification with his or her state income tax return.

Currently, the governing body of the county, city, village or rural or suburban fire protection district is required to file a list of qualifying volunteer members with the state Department of Revenue. LB222 instead would require the certification administrator to file the list with the department.

A Revenue Committee amendment, adopted 29-0, would require the administrator also to send a copy of the list to the governing body of the county, city, village, or rural or suburban fire protection district.

Sen. Bruce Bostelman of Brainard supported the bill. In a survey conducted last year as part of an interim study of the state’s volunteer emergency responders, he said, many respondents expressed frustration about the tax credit’s administrative process.

Elmwood Sen. Robert Clements also supported LB222, saying it would make it easier for volunteers who qualify for the credit to claim it on their tax returns. Many volunteer emergency responders whose taxes he has prepared have had difficulty proving to him that they qualify, he said.

Senators voted 40-0 to advance the bill to select file.