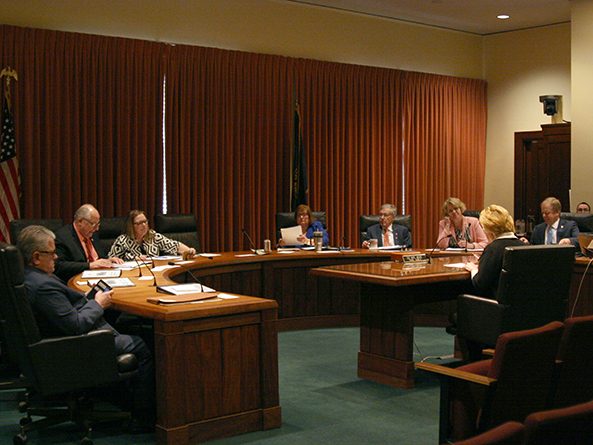 Out-of-state corporations selling software to Nebraska customers would pay state income tax on those sales under a proposal heard April 3 by the Revenue Committee.

Sen. Lou Ann Linehan of Elkhorn, sponsor of LB288, has said she introduced the bill as a placeholder that could be amended to include any state income tax law changes needed to reflect federal tax code changes made by Congress in 2017.

At an April 3 rehearing of LB288, Linehan introduced an amendment that would replace the bill. The amendment would expand the definition of “doing business in this state” to include the sale, lease or license of services, intangibles or digital products to customers in Nebraska that exceed $500,000 in the previous or current calendar year.

The U.S. Supreme Court ruled last year in South Dakota v. Wayfair that a state may require online retailers without a physical presence in the state to collect and remit state sales tax. In response to that decision, the Legislature passed a bill earlier this session that requires out-of-state internet retailers to collect and remit state sales tax on purchases made by Nebraska residents if those retailers meet certain sales thresholds.

Linehan said the proposed amendment would set a similar threshold beyond which out-of-state corporations that license trademarks, sell software or provide consulting services to Nebraska customers would be subject to state income tax.

Stacy Watson testified in support of the amendment on behalf of the Grow Nebraska Tax Coalition, saying many states have passed or will pass similar legislation based on the Wayfair decision. Linehan’s amendment would make it clear to taxpayers and the state Department of Revenue that Nebraska may impose income tax on out-of-state corporations, she said.

Adam Thimmesch, an associate professor at the Nebraska College of Law who studies state and local taxes, gave neutral testimony on his own behalf. He said the amendment would both clarify and limit what the state already may do.

Nebraska already imposes its corporate income tax on any business that exceeds the protections of the “public law,” Thimmesch said, a federal limitation that bars states from imposing income tax on companies that only solicit orders for sales of tangible personal property that then are sent outside of the state for approval or rejection.

Thimmesch said the proposed $500,000 threshold is similar to what some states impose, but he noted that others impose a lower threshold or leave it to their respective departments of revenue to determine an appropriate threshold.

No one testified in opposition to the amendment and the committee took no immediate action on LB288.