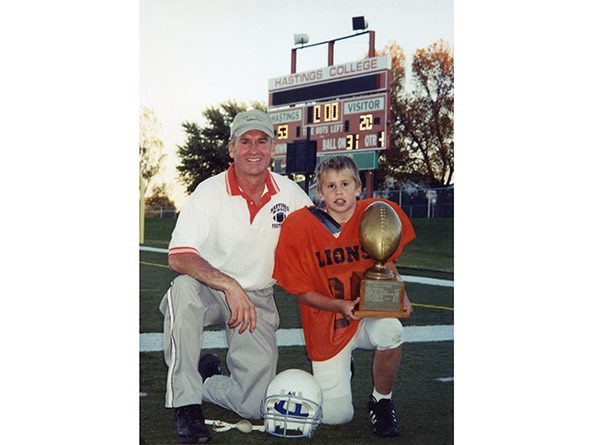 Above: Sen. Dave Murman and his son Chase after winning a football championship in 2003.

Sen. Dave Murman of Glenvil does not often watch the late evening news. But he was watching one night in mid-February 2018 when it was reported that his predecessor in the District 38 seat had announced that he would not seek reelection.

Murman went to his wife, Kathy, who was already in bed.

He expected her to give him a sharp elbow, but instead Kathy told him she knew how long he had thought about running for the Legislature and that it “might be a good thing” for him.

“So that made me think, ‘Well, maybe I could do that,’” Murman said.

Murman’s interest in politics can be traced to his parents. His father, a dairy and row crop farmer, served on the boards of several dairy organizations, as Murman later did. His mother—“a big fan of FDR”—helped with elections during his school years. At the University of Nebraska-Lincoln, Murman majored in animal science, but he also studied political science.

“I thought maybe I’d want to do something else besides farm,” he said.

Then he met Kathy, a fellow Glenvil native. Murman decided to move home, join his father and brother on the farm, get married and start a family. The couple raised three children—Kelsi, Whitney and Chase—and they have five grandchildren.

Murman enjoys traveling, even though life’s circumstances have kept him mostly close to home. His younger daughter, Whitney, has disabilities, and Kathy is her full-time caregiver. Murman drives home each weekend to be with them.

Despite the travel required, he said, Kathy is “totally supportive” of his new job.

The idea to run for the Legislature had been in the back of his mind since he sold his interest in the dairy operation to his brother three years ago, Murman said. Now that he has returned to Lincoln as a state senator, the routine reminds him of his younger days as a dairy farmer when “about all I had time to do was work,” Murman said.

In his free time, he likes to play sports, although time has imposed certain limits.

“I’ve had three shoulder surgeries, and they’re both torn again,” Murman said. “If it wouldn’t be for that, I’d still be playing basketball.”