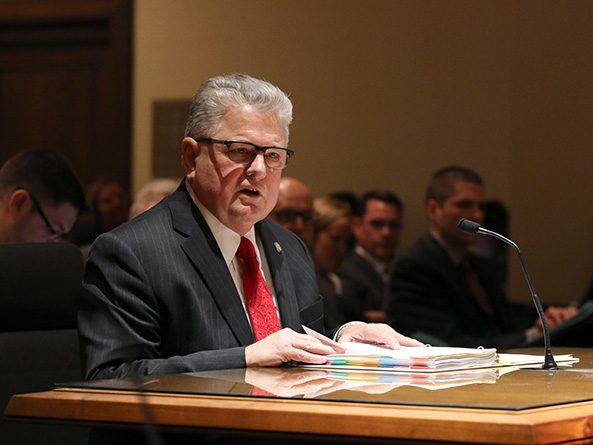 The Revenue Committee heard testimony March 6 on a bill that would create a new business tax incentive program to replace the Nebraska Advantage Act.

The application period for the current program, administered by the state Department of Revenue, is set to end next year. LB720, introduced by Sen. Mark Kolterman of Seward, would end the Nebraska Advantage Act and create the ImagiNE Nebraska Act.

Under the new program, businesses would apply to the state Department of Economic Development and enter into an agreement with the department if they meet the program’s requirements.

Agriculture, mining, oil and gas extraction, construction, retail, health care and food services are among the industries that would not qualify.

The bill would require the director of economic development and the state tax commissioner to submit an annual report to the Legislature. The report would contain a list of agreements signed during the previous year, agreements that are still in effect, the identity of the taxpayer who is party to an agreement and the qualified location, among other information.

The state Department of Revenue estimates LB720 would reduce state tax revenue by approximately $1 billion between fiscal year 2019-20 and FY2028-29. No new applications could be filed after Dec. 31, 2029.

Kolterman said a business incentive program is needed to help Nebraska compete with other states when trying to attract business investment. The Nebraska Advantage Act has succeeded in doing that, he said, but the new program would be simpler, more transparent and focused on generating higher-wage jobs.

“I believe the Nebraska Advantage [Act] is one of the reasons Nebraska has had a very stable economic climate the past 15 years, even in the face of national recession,” Kolterman said. “Having said that, the time has come to create a new program that is responsive to a 2019 economy and beyond.”

Kolterman brought an amendment to the hearing that he said would make several technical changes to the incentive program but would not change the basic concepts.

Dave Rippe, director of the state Department of Economic Development, testified in support of the bill. He said companies that have received incentives under the Nebraska Advantage Act have generated more than $8 billion in capital investment, nearly $5 billion in wages and more than 16,000 jobs.

Rippe said companies participating in the ImagiNE Nebraska Act would receive about 20 percent less in incentives than they would under the Nebraska Advantage Act, but the new program would make those incentives available up to two years earlier.

“The ImagiNE Nebraska Act is a vital piece of our state’s ability to competitively recruit, grow and expand opportunities in Nebraska,” he said.

David Brown testified in support of the bill on behalf of the Greater Omaha Chamber of Commerce and the Lincoln Chamber of Commerce. Nebraska has been able to compete for economic development projects because its current business tax incentives counterbalance the state’s relatively high tax rates, he said.

“If indeed incentives disappear, so does economic development in the state,” Brown said.

David Arnold, vice president of corporate development for an Omaha-based software company, also testified in support. He said the company has hired more than 600 employees since it started receiving incentives under the Nebraska Advantage Act in 2015. It is unlikely the company would have hired as many people without those incentives, he said.

“The Advantage Act acted as an accelerant to our growth and will continue to do so,” Arnold said.

Renee Fry, executive director at OpenSky Policy Institute, testified in opposition to the bill. She said the Nebraska Advantage Act was estimated to reduce state tax revenue by approximately $24 million to $60 million each year, but the program has cost approximately $15o million to $160 million in the past two fiscal years, she said.

Additionally, Fry said, LB720 does not incorporate lessons learned and best practices recommended by the Legislative Performance Audit Committee and other groups that have studied tax incentive programs. Other states have capped total incentives and limited the time during which they can be earned to make it easier to budget for those expenditures, she said.

John Hansen, president of the Nebraska Farmers Union, also testified in opposition. The state’s business tax incentives have not benefited rural Nebraska, he said, and the Legislature should consider whether a new incentive program is needed.

“Once the state rushes in and the state signs on the dotted line, there [are] years and years of obligations that may or may not provide … a favorable cost-benefit ratio,” he said.

Mark McHargue, vice president of the Nebraska Farm Bureau, gave neutral testimony on behalf of the Agriculture Leaders Working Group, comprising the leaders of seven agricultural organizations. Although it is not opposed to tax incentives, McHargue said, the group’s priority is property tax relief for Nebraska farmers and ranchers.