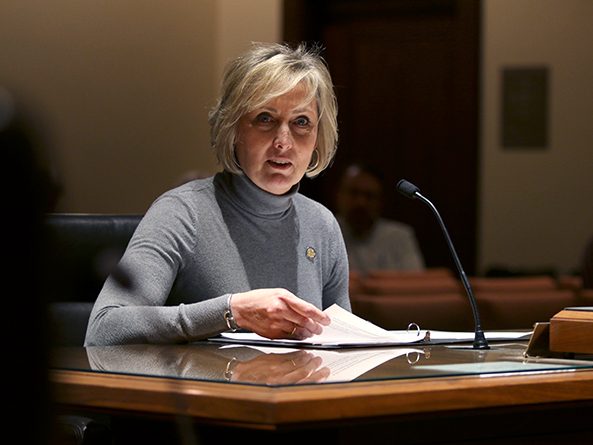 The Executive Board considered a proposal Feb. 27 that would expand the oversight powers of the Office of the Public Counsel to include licensed assisted living facilities.

The public counsel—also known as the state Ombudsman’s Office—is an independent office that handles citizen complaints regarding the actions of administrative agencies of Nebraska state government.

Walz said the bill was the result of a report submitted by the LR296 State-Licensed Care Facilities Oversight Committee. The committee was formed last year to examine assisted living facilities in which many of the residents are diagnosed with a mental illness.

The oversight committee visited many facilities across the state, Walz said, encountering “truly horrible” living conditions, including black mold, bed bugs and a lack of adequate resources and supports.

Currently, the state Department of Health and Human Services is required to visit a random sample of 25 percent of the state’s licensed assisted living facilities each year, with no facility going more than five years between survey visits. The ombudsman’s office can visit facilities only in conjunction with a DHHS surveyor, Walz said, a system that she described as inadequate.

“We need to be sure that people are safe and free from abuse, neglect and extortion” Walz said. “Giving the public counsel more oversight is just one way to get a better grasp on what we’re dealing with.”

Jerall Moreland, deputy ombudsman for institutions with the Office of the Public Counsel, testified in support of the bill. He said the oversight committee’s findings indicate that many assisted living facilities in Nebraska are not well equipped to serve people with significant mental health issues—to the point of putting the people who live in them at risk.

Calling the findings “extremely disappointing” and “highly inhumane,” Moreland said the state needs more oversight than the system now provides, including an avenue for independent inquiry into facility operations.

“The job is not being done right now,” he said.

“Given the egregious incidents … increased direct oversight is needed,” he said. “This legislation, we feel, would go a long way to meet that need. It would provide an additional layer of protection [including] another avenue for persons with disabilities to report incidents.”

Darrell Klein, deputy director of the DHHS Division of Public Health, testified in opposition. Although licensed by the state, assisted living facilities are privately owned and operated, he said.

The public counsel’s office has the authority to enter and inspect a DHHS 24/7 facility at any time, Klein said, but it is beyond their scope to do the same with privately-owned businesses without permission from the owner.

“This [bill] goes beyond the jurisdiction of the state and the department in particular,” he said.

The committee took no immediate action on LB572.